Home > Heraldry > Parts of a Coat of Arms 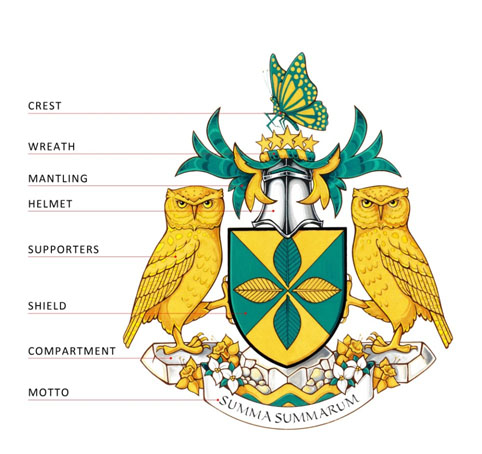 The shield is the central shape on which the colours and symbols that make up the coat of arms are placed. Without a shield, there is no coat of arms. The elements that surround it are optional.

The helmet placed above the shield recalls the origins of heraldry. The mantling flowing from it is a piece of cloth that protected the metal armour from the sun and which became torn and cut during combat.

At the top of the coat of arms is the crest, placed on a wreath of twisted cloth from which the mantling flows. In the Middle Ages, the crest was a three-dimensional object meant to make a knight look taller and more intimidating.

The motto is a short inspirational phrase or series of words, like a proverb. It is usually shown below the shield on a scroll and can be written in any language.

The supporters, which can be animals or human figures, are placed on either side of the shield, appearing to hold it up. They usually stand on a base known as a compartment. In Canada, institutions (such as municipalities and schools), holders of certain state offices (such as the Governor General, Lieutenant-Governors, the Prime Minister, Premiers and Privy Councillors) as well as recipients at the highest levels of national honours can be granted supporters.