Queen Elizabeth II was the longest-reigning monarch in Canadian and Commonwealth history. Throughout her extraordinary reign, she became the most widely travelled monarch, visiting more than 100 countries, often accompanied by His Royal Highness The Duke of Edinburgh. The Queen delighted in meeting with people from all walks of life and in recognizing their contributions to society.

Canada was honoured to host The Queen on 22 Royal Tours. Their Royal Highnesses visited all regions of the country, developing a great understanding of and affection for Canada and its people.

I am sure that nowhere under the sun could one find a land more full of hope, of happiness and of fine, loyal, generous-hearted people. […] They have placed in our hearts a love for their country and its people which will never grow cold and which will always draw us to their shores. 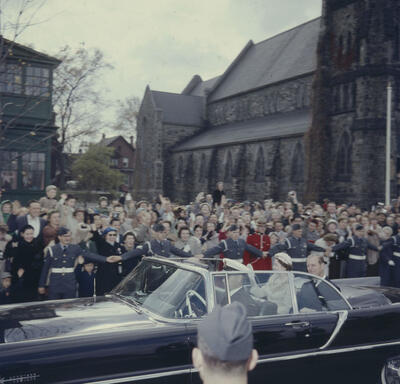 The Queen and the Duke of Edinburgh are being driven in a black convertible. A large crowd of people wave to them. A church stands in the background. 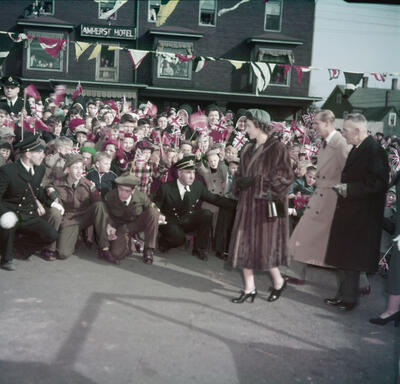 Then-Princess Elizabeth, wearing a long, fur coat, walks past a crowd of people. Several photographers are kneeling before her to take photos. 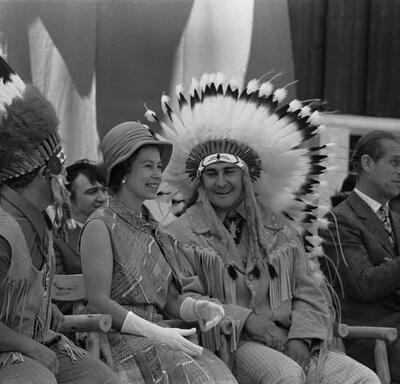 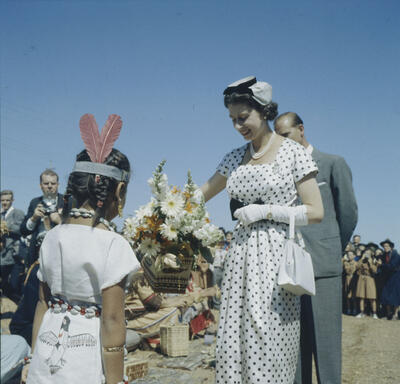 The Queen accepts a bouquet of flowers from an Indigenous child dressed in traditional clothing. The Duke of Edinburgh is behind her. A crowd of people are in the background. 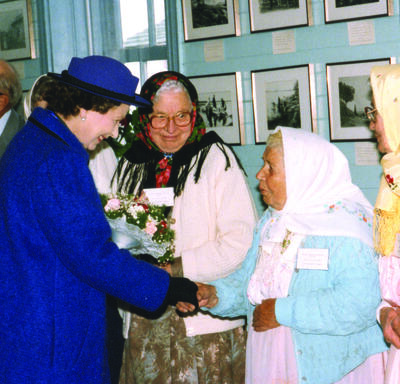 The Queen shakes hands with a woman wearing a kerchief, while two other women in similar attire look on. 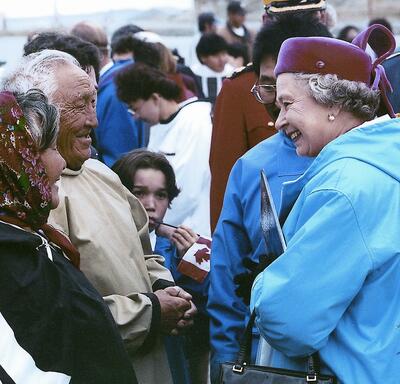 The Queen, in a blue parka and burgundy hat, smiles at two Inuit Elders in traditional attire. A child holding a small Canadian flag looks on. A crowd of people are in the background. 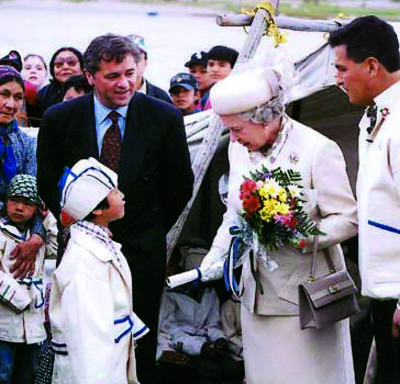 The Queen, dressed in white and carrying a bouquet of flowers, is greeted by a child wearing a white-and-blue ceremonial coat and hat. Two officials look on, while a crowd of people stand behind them. 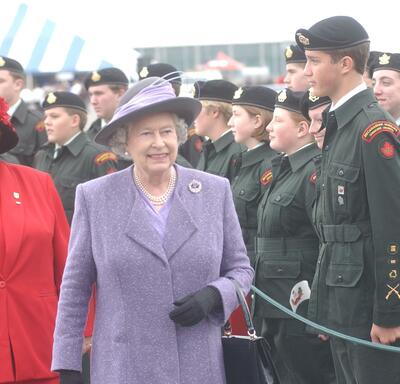 The Queen, wearing a purple coat and matching hat, walks past a group of cadets in uniform, standing at attention. 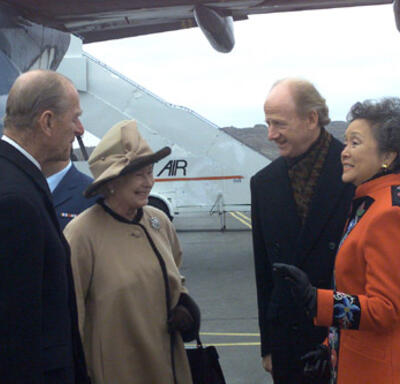 The Queen and The Duke of Edinburgh speak with Governor General Adrienne Clarkson and John Ralston Saul. They are standing on the tarmac of an airport, beside a plane. 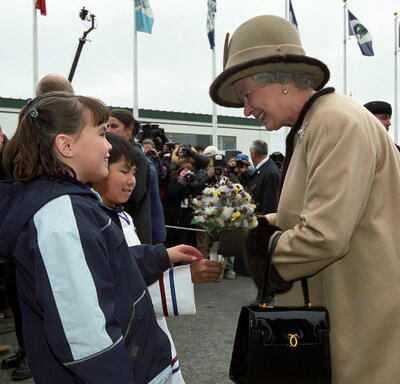 The Queen, dressed in a beige coat and matching hat, receives a bouquet of flowers from two children. A crowd of people stand behind them. Several flags on flagpoles are in the background. 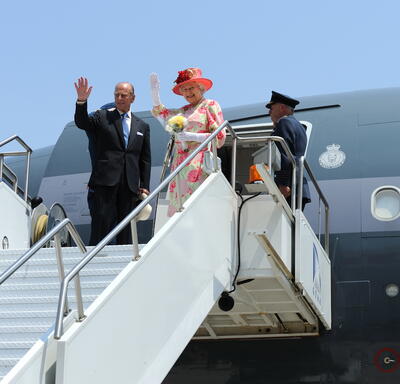 The Queen and The Duke of Edinburgh wave from atop a set of stairs connected to a plane. 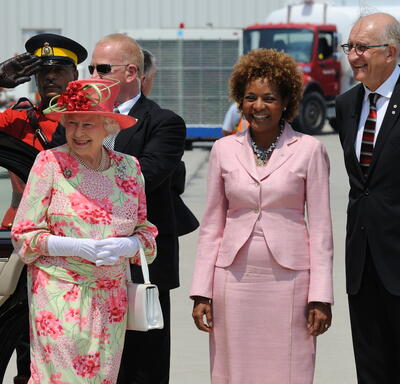 The Queen stands next to then-Governor General Michaëlle Jean and Jean-Daniel Lafond. They are outside an airport. An RCMP officer and other security personnel are behind them. 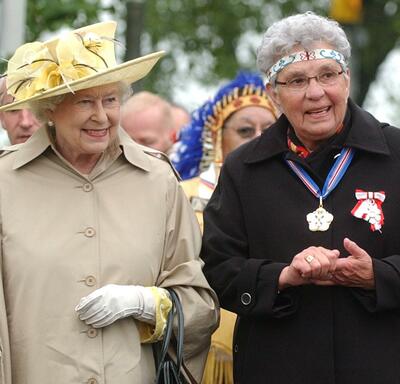 Wearing a beige rain jacket, The Queen walks beside an Indigenous woman wearing a beaded headband and two medals. 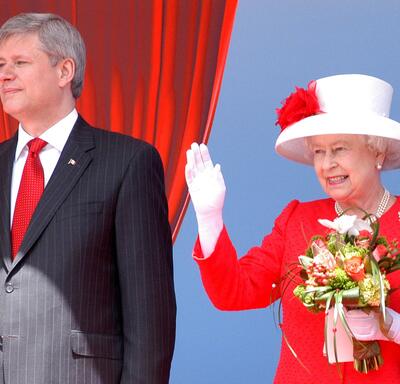 The Queen, in a red outfit and white-and-red hat, holds a bouquet of flowers and waves. She is smiling. Then-Prime Minister Stephen Harper stands next to her, wearing a dark suit with a red tie. 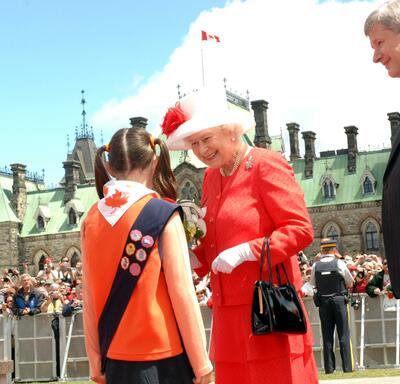 The Queen smiles as she receives flowers from a child wearing a Girl Guide uniform. Then-Prime Minister Stephen Harper looks on. A crowd of people and the Parliament Buildings are in the background.

Born on April 21, 1926, in London, United Kingdom, Elizabeth II was the first monarch to be crowned Queen of Canada. As the Canadian head of State, The Queen was formally designated commander-in-chief of Canada, and offered support and encouragement to members of the Canadian Armed Forces, as well as to their families and loved ones. She also promoted unity and celebrated excellence by presenting awards to outstanding Canadians. Today, the powers held by The Queen, including those of head of State and commander-in-chief, are embodied by the governor general as the Crown’s representative in Canada.

The Queen cared deeply for the sacred relationship between the Crown and Indigenous peoples. Recognizing that the world’s diversity is its strength, she supported efforts towards reconciliation.

Throughout her reign, The Queen embodied the principles of service. On her 21st birthday, she addressed the Commonwealth, dedicating her life to the service of others:

I declare before you all that my whole life whether it be long or short shall be devoted to your service and the service of our great imperial family to which we all belong.

In Canada, The Queen supported important causes as patron or president of more than 30 Canadian philanthropic, cultural and charitable organizations.

The Queen was a steadfast and comforting presence to many Canadians, through times of great challenge and upheaval. She was dedicated to her people and inspired so many with her service and compassion. She will be greatly missed.