Hover over the image to find out more about the elements of the Governor General's personal coat of arms. 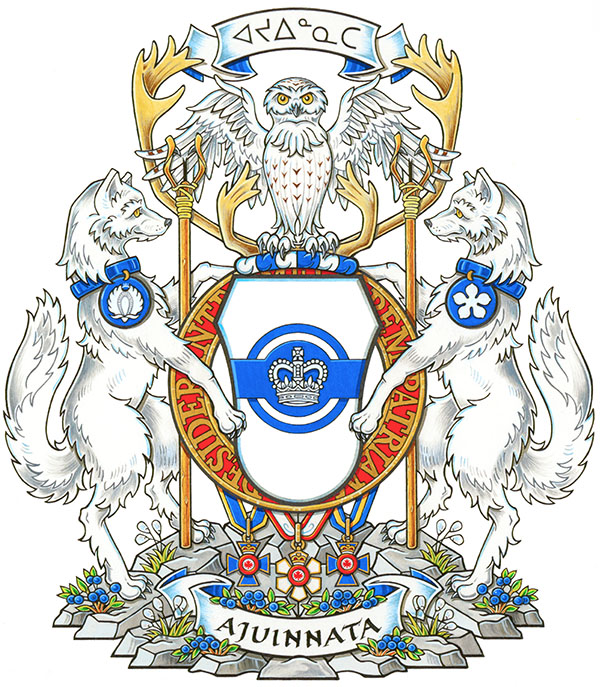 Symbolism of the heraldic emblems

The colours of the shield represent the snow and skies of northern Canada. The horizontal band illustrates Her Excellency’s trailblazing career in Inuit and circumpolar affairs, and the disc and the circle represent an inclusive relationship between Indigenous peoples and all Canadians. The Royal Crown indicates her service as Governor General and the Sovereign’s representative.

The shield’s shape alludes to the amauti (parka) worn by Inuit mothers.

The snowy owl is known for its agility and adaptability; it thus alludes to Her Excellency’s life experience and her diplomatic skills. The caribou antlers represent this animal that is central to Inuit culture. They symbolize the interconnectedness between humans and nature.

The Inuktitut saying means “Let us persevere,” a guiding principle for her and an indication of her hopes for the truth and reconciliation process.

The Arctic fox, famed for its endurance and long-distance migratory treks, epitomizes Her Excellency’s career as a diplomat and advocate for circumpolar affairs. Mountain sorrel (on the left neck pendant) is a plant found in abundance in Nunavik, Her Excellency’s home region of northern Quebec. The strawberry flower (on the right pendant) is the emblem of the Clan Fraser and honours her husband, Whit Grant Fraser. The kakivak harpoon honours her Inuit grandmother who taught her many traditional values and life skills.

The blueberry patch represents one of her favourite pastimes, blueberry picking. The cottongrass is a northern plant used for making wicks for the qulliq, the traditional Inuit lamp.