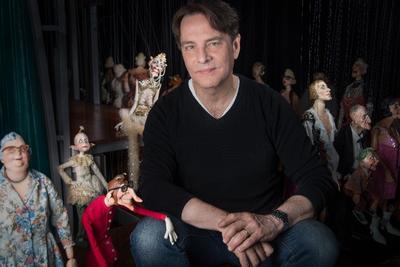 Ronnie Burkett is an acclaimed puppeteer, playwright, performer and designer from Medicine Hat, Alberta. He has entertained audiences with his theatrical productions featuring puppets of his own design and creation for more than 40 years. He began his career with a one-man street theatre show that toured schools and community centres to great fanfare. He later formed his own theatre company and turned his creative attention to adult themes and characters that would come to embody artistically-conceived architypes of the human condition, beloved by his devoted followers worldwide. He is not only a prolific writer, but also an avant-garde designer and performer, creating original and innovative new work at a breathtaking pace. His performances have established box office records at Canadian Stage, Theatre Network and the Vancouver East Cultural Centre. He has won many significant theatre awards in cities across Canada and throughout the world, and is a sought-after mentor in his field.

On criticism: “When I started, theatre critics weren’t even doing puppet show reviews, so even a bad review is a victory.”

Puppetry doesn’t lock me into my physical being. In theatre school, I found it very limiting to be constrained to a certain height, gender, sex. There’s so much discussion of gender fluidity these days, but I’ve been doing this my whole life.