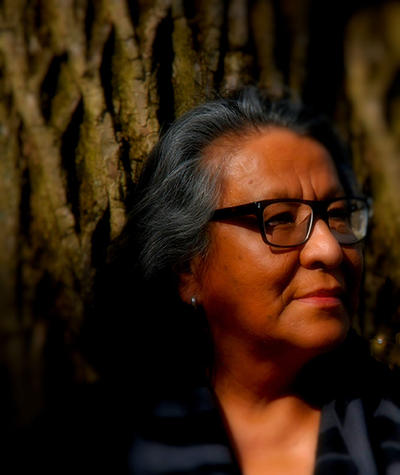 Maxine Noel is an internationally renowned Native visual artist and mentor with a career spanning more than 35 years.

Born on the Birdtail Reserve in Manitoba, Maxine Noel has lived in Stratford with her daughter for more than 20 years. She believes that there is a common bond that links all cultures of the world, and she continues to work tirelessly to bridge the gap between Native and non-Native communities. Her dedication, commitment, strength and self-determination make her a valuable role model.

Maxine works tirelessly and selflessly for others throughout our communities. She was one of the first artists to work with the Canada and Africa Village Twinning Programs, and she is a founding board member of the National Aboriginal Achievement Foundation [now Indspire]. She has lectured at the Saskatchewan School of Fine Arts, the University of Western Ontario and the Ontario College of Art. She has also spoken at schools and to service and other groups throughout Canada, encouraging young people to engage in the work of building strong supportive communities.

In 2017, Maxine leant her support to Dignitas International’s Indigenous Health Partners Program to help improve diabetes care in remote and underserviced First Nations communities in Canada. Proceeds from the sale of items such as an infinity shawl featuring Maxine’s painting Spirit of the Woodlands, produced by Oscardo, are being donated to this much-needed program.

Currently, Maxine and other First Nations artists are working with Artists Against Racism on their EAGLES RISING project to raise awareness of the persistence of racism targeting Indigenous peoples in Canada. This project will involve a Canada-wide campaign of billboard and bus shelter advertisements featuring the work of First Nations artists to highlight this ongoing problem.

My art is the way I offer healing to the worlds around me, worlds sitting so often on the cusp of destruction and brutality. These worlds are dangerous and beautiful places, sacred to us all, and so their health and their healing are responsibilities we all must take up, each of us finding the work we need to do, and then doing it well and fully. I am honoured by my appointment to the Order of Canada, an honour I share with my people, and with all peoples doing the work of making a better world, with those who came before, and with those still to come.

Maxine signs her work with her Sioux name, Ioyan Mani, a name given to her by her grandmother. It means “Walks Beyond.”

In September 2016, First Nations leaders and federal cabinet ministers came together to honour Maxine’s artistry and contributions to raising public awareness of the Canadian crisis of missing and murdered Indigenous women and girls. Her painting, Not Forgotten, expresses the terrible history of the lives of Indigenous women and girls, as well as resilience and hope for reconciliation and redress. Maxine gifted the original painting to the Native Women’s Association of Canada in order to raise awareness and much-needed funds for the important work needed to accomplish this reconciliation. It will be loaned to the Canadian Museum of History for the next five years to hang in the Canadian History Hall, where it will help to tell the story of missing and murdered Indigenous women.