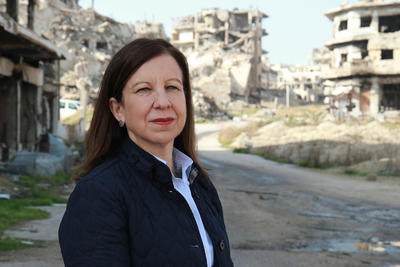 Born in eastern Canada, Lyse Doucet is the BBC’s Chief International Correspondent and a senior presenter who anchors news programs for BBC World TV and World Service Radio. She is regularly deployed to present special news coverage from the field, interview world leaders and report across the BBC’s domestic and global outlets.

Before joining the BBC’s team of presenters in 1999, Lyse spent 15 years as a BBC foreign correspondent with postings in Jerusalem, Amman, Islamabad, Tehran, Kabul and Abidjan. She is a regular visitor to the Middle East and has covered major stories in the region since 1994, when she established the BBC’s office in Amman, Jordan.

Lyse was awarded an O.B.E. in the Queen’s Honours list in 2014 for her services to broadcasting and the Columbia Journalism Award for lifetime achievement in 2016.

Her most recent awards include, in 2018, the Trailblazer Award from the Georgetown Institute for Women, Peace and Security, and the Change the Culture Award from the Theirworld education charity. In 2017, she was honoured with the Charles Wheeler Award for Broadcasting by the British Journalism Review, Italy’s Luchetta Award for a report on Syrian children, and the Next Century Foundation Award for Outstanding Contribution to Broadcasting. In 2016, she received the Sandford St Martin Trustees’ Award for reporting on religious issues, and the One World Media Radio award for a documentary on Afghan women. Earlier honours include an Emmy and a Peabody in the United States in 2014 for her team’s reporting from Syria.

She is a trustee of Inter Mediate, an honorary patron of Canadian Crossroads International and a member of Friends of Aschiana UK, which supports street working children in Afghanistan. She is also a founding member of the Marie Colvin Journalists’ Network and a Senior Fellow of Massey College at the University of Toronto. She is a trustee of the Frontline Club for Journalists and a member of the Canadian Journalism Forum on Violence and Trauma. Lyse has eleven honorary doctorates from leading British and Canadian Universities. She has a Master’s degree in International Relations from the University of Toronto, and a BA Hons from Queen’s University in Kingston.

I am profoundly touched by this great honour. While my career has taken me around the world, I am still a Canadian. I cherish and sustain my roots in eastern Canada, including my Acadian and Irish ancestry, as well as my connections to friends and family, universities and charities, across our country. I continue to return to Canada several times a year so I can stay in touch with the conversations which define our nation. Wherever I travel, I am proud to be Canadian.