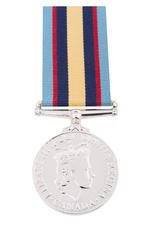 The Gulf and Kuwait Medal recognizes the participation of Canadian Armed Forces members deployed or in direct support of the operations against Iraq during the Gulf war. The medal is awarded to those employed during the build up of troops before the beginning of hostilities and a bar is awarded for those deployed during the actual war.