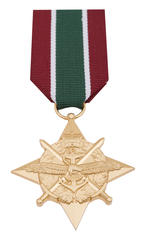 This general service award has been created as a means to recognize - in a timelier manner - those who serve in operations in the presence of an armed enemy. Rather than creating a new honour for each new Canadian Armed Forces operation as it arises, the General Campaign Star and General Service Medal - with their theatre or service specific ribbons - can be awarded in future to honour participation in any operation that meets the criteria.