The Medal is awarded to former members of the Canadian Armed Forces  who volunteered and served in Korea and the adjacent areas, including Japan, Okinawa and Korean waters, during all or part of the period from June 27, 1950, to July 27, 1954.

Potential recipients must have either:

The Medal may be awarded posthumously.

Description of the medal 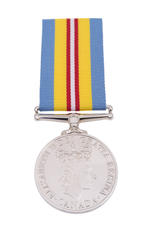 A circular medal of copper and zinc alloy:

The Medal is worn suspended from a yellow ribbon that is 32 mm in width, bordered on each exterior edge with a United Nations blue stripe 7 mm in width, with a central red stripe 6 mm in width on which is centred a 2-mm-wide white stripe.