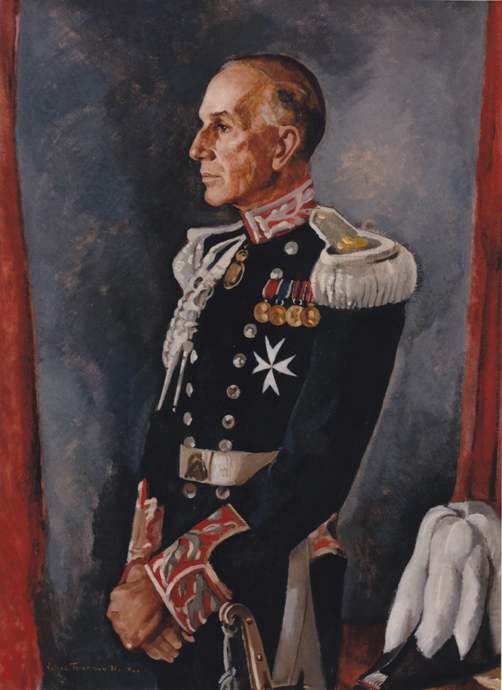 With Vincent Massey's appointment as Governor General, a new tradition began – he was the first Canadian appointed to the post, and from that day the Governor General has always been a Canadian citizen. If the innovation had any detractors, they were soon won over by Mr. Massey's exceptional qualities in the viceregal role.

Vincent Massey believed that the Crown belonged to Canadians, and as the Sovereign's representative his job was to strengthen that bond. He combined a respect for the Crown and its ceremonies with a commitment to using the Office of Governor General to promote Canadian unity and identity. He was tireless in his travels, visiting every corner of the country – where plane or ship couldn't reach, he went by canoe or dog team.

Mr. Massey's speeches often praised Canada's cultural diversity, and he emphasized the need to learn both English and French. Whether he was speaking to the Jewish Congress, being honoured by the Blood First Nation in Alberta, or visiting fishing villages in the Maritimes, he was a champion of all Canadians.

Encouraging the arts was one of Mr. Massey's noteworthy achievements. His promotion of a national festival of the arts began a movement that eventually led to the founding of the National Arts Centre. At Rideau Hall, he established writer's weekends to help create a Canadian literary identity. The then fledgling Stratford Shakespearean Festival received his enthusiastic support and he lent the prestige of his position to the opening of numerous art exhibitions. In 1953, he established the Governor General's Awards for Architecture, and he presented Canada Council awards to many artists, including the composer Sir Ernest MacMillan.

However, Vincent Massey was careful not to concentrate exclusively on any one area – he encouraged excellence in every field. His greatest ambition, creating a Canadian honours system, was not realized during his term, but his efforts helped lead to its creation in 1967, and Mr. Massey was one of the first Companions appointed in 1967. He established the Governor General's Gold Medal for the Institute of Chartered Accountants in 1954, and the Massey Medal to recognize national exploration, development, and description of geography for the Royal Canadian Geographical Society in 1959. Canada was developing a new confidence through its accomplishments in science, business and the arts, and Vincent Massey helped foster this positive identity.

Mr. Massey revived the use of the State carriage in 1953 when it was used in Ottawa for the Coronation celebrations of Her Majesty Queen Elizabeth II. Amid much pageantry, the carriage brought Vincent Massey and his staff to Parliament Hill under escort by members of the Royal Canadian Mounted Police. Mr. Massey introduced Her Majesty Queen Elizabeth II's Coronation speech, broadcast in London and around the world. The carriage he used that day is still used for the opening of Parliament and during official State visits. To commemorate Her Majesty's Coronation, Mr. Massey issued silver spoons to all Canadian children born on that day, June 2, 1953.

Mr. Massey conferred new regimental colours on the Governor General's Foot Guards, and presented a regimental mascot to the Royal 22e Régiment at La Citadelle in Québec, a well-behaved goat of Persian ancestry from the Royal herd called "Baptiste". The mascot was received by the regiment's honorary colonel, General Georges Vanier, who would become Vincent Massey's successor as Governor General.

Vincent Massey came from a prominent Canadian family – successful in business and active in philanthropy. His brother was the popular actor Raymond Massey, and his father was president of the Massey-Harris Company, known worldwide for manufacturing agricultural equipment.

His early education took place at St. Andrew's College. He continued his studies at the University of Toronto and then went on to attend Oxford – an early experience of England that gave him a lasting appreciation of its traditions and institutions.

After returning to Canada, he became Dean in Residence of Modern History at Victoria University in Toronto. On June 4, 1915, he married Alice Parkin, daughter of Sir George Parkin, a former principal of Upper Canada College and secretary of the Rhodes Trust. Sadly, Mrs. Massey died in July 1950, just 18 months before her husband's appointment as Governor General. As a result, his daughter-in-law, Lilias, acted as Chatelaine of Rideau Hall while Mr. Massey was in office.

Before beginning his career in diplomacy, Vincent Massey spent four years as president of the business his father had founded. During this time, he pursued philanthropic interests – promoting the arts, education and letters. He also began compiling one of Canada's great art collections and through the Massey Foundation, influenced the construction of Massey College at the University of Toronto.

In 1926, he was appointed first Canadian Minister to Washington and then High Commissioner to London in 1935. He made such a favourable impression in England that in 1946, King George VI invested him with the Companion of Honour. In 1949, he was appointed chairman of the Royal Commission on National Development in the Arts, Letters and Sciences. The ensuing report issued in 1951, known as the Massey Report, led to the creation of the National Library of Canada and the Canada Council.

After his term as Governor General, he retired to Batterwood, his home near Port Hope, Ontario, and he continued to chair the Massey Foundation, as he had done since 1926. The Foundation, incorporated in 1918, was the first trust of its kind to be established in Canada. He devoted his time to two of the foundation's endowments on the University of Toronto campus – Massey College and Hart House, a beautifully-designed student centre. For his achievements representing Canada's Sovereign, Her Majesty Queen Elizabeth II awarded him the Royal Victorian Chain on July 22, 1960. At the time, he was the only Canadian to receive this great honour.

In 1961, the Massey Lectures were created to honour Vincent Massey, in recognition of his energetic support for the humanities in Canada. The Massey Lectures allow a noted scholar or public figure to give a talk on a subject of his or her choice, and are considered by many to be the most important public lecture series in Canada.

Vincent Massey died while visiting England on December 30, 1967, and was given a State funeral in Canada in early January. He is buried in an Anglican cemetery near his home in Port Hope.