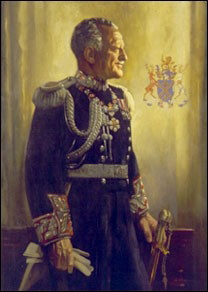 Roland Michener was appointed Governor General the same year that Canada celebrated 100 years of Confederation. Mr. and Mrs. Michener had barely started their term of office when the long procession of visiting dignitaries began. It was 1967 and Rideau Hall was rarely empty – 53 heads of State arrived to celebrate the Centennial and visit Expo '67 in Montreal.

On July 1, 1967, the Order of Canada was born and Governor General Michener presided over the first presentation ceremony in November of the same year. In 1972, the Order of Military Merit and Decorations for Bravery were introduced, and in 1973 Her Majesty Queen Elizabeth II presented Mr. Michener with the Royal Victorian Chain, one of only two Canadians ever to receive the honour. (The other was former Governor General Vincent Massey in 1960.)

Mr. Michener was an avid sportsman and athlete who followed a daily exercise regime – he could be seen jogging every morning. His encouragement to engage in daily exercise has had a lasting effect on the physical well-being of many Canadians. Many people still remember his support of the 'Participaction Program' – a campaign aimed at increasing the fitness of all Canadians. He further encouraged sport by establishing the Roland Michener Trophy for the Juvenile "AAA" championship in Ontario as well as a championship trophy for sport fishing, called the Michener Tuna Trophy.

Mr. Michener was a great motivator of Canadian youth and he encouraged them to be part of Canada's great future by achieving their full potential. He believed that his role as Governor General put him in a unique position to inspire Canadians by applauding their best efforts. His encouragement of excellence also extended to journalism with the creation of the Michener Awards for Journalism in 1970.

During their stay at Rideau Hall, Roland Michener and his wife Norah relaxed protocol in a number of ways – the most well-known example was the dropping of the curtsey. They were a gracious viceregal couple and Government House became a centre for social life during their tenure. They returned the Governor General's New Year's Levee to Rideau Hall from the Senate Chamber in 1972. The Micheners frequently visited abroad and they also instituted periodic meetings with provincial Lieutenant-Governors, which started in 1973.

Roland Michener attended the University of Alberta for his undergraduate degree, then earned graduate degrees at Oxford on a Rhodes Scholarship. While he was at Oxford he met Lester B. Pearson – the two men would become lifelong friends. He practised law in Toronto while sitting on the Executive Council of Ontario and became the secretary general for the Rhodes Foundation.

He married Norah Willis on February 26, 1927 in St. Mary Magdalen Anglican Church in Toronto, and the couple had three daughters. Sadly, one daughter, Wendy, died at the age of 33 on January 1, 1969, while the Micheners were in office.

For her thesis on the French philosopher, Jacques Maritain, Mrs. Michener received her doctorate from the University of Toronto in 1953. From 1957 to 1962, Mr. Michener was speaker of the House of Commons, then High Commissioner to India and first Canadian Ambassador to Nepal from 1964 to 1967.

After his term as Governor General, the couple moved to Toronto where Mr. Michener served as Chancellor of Queen's University until 1980, all the while remaining active in business throughout Canada.

In his later years, a mountain in Alberta was named in his honour and, still energetic at age 80, he climbed to the peak to celebrate the naming ceremony. Following his death at the age of 91, his ashes were interred beside those of his wife, who had died on January 12, 1987, at St. Bartholomew's Anglican Church in Ottawa, directly across from Rideau Hall.