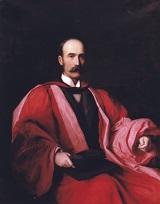 The Marquess of Lansdowne was Governor General during turbulent times in Canada. Sir John A. Macdonald's government was in its second term and facing allegations of scandal over the building of the railway, and the economy was once again sliding into recession. The Northwest Rebellion of 1885 and the controversy of its leader, Louis Riel, posed a serious threat to the stability of Canada.

Yet the Marquess of Lansdowne took the opportunity to travel extensively throughout western Canada in 1885, meeting many of Canada's First Nations peoples. While the railway to British Columbia was not completed, this did not stop the Governor General from travelling throughout the Rockies on horseback and by boat. On his second trip out west, Lord Lansdowne took the new Canadian Pacific Railway, and was the first Governor General to use the line all the way out west.

His experiences in western Canada gave the Marquess of Lansdowne a great love of the Canadian outdoors and the physical beauty of Canada. He was an avid salmon fisherman, and was also intently interested in winter sports. His love of the wilderness and Canadian countryside led him to purchase a second residence on the Cascapedia River in Quebec.

It was with the issue of fishing rights between the United States and Canada that the Marquess of Lansdowne proved himself as an adept statesman, helping to negotiate a peaceful settlement to a potentially serious dispute between both countries. He was also a supporter of scientific development, presiding over the inaugural session of the British Association for the Advancement of Science in 1884.

The Marquess of Lansdowne departed Canada with a true appreciation of the beauty of the wilderness and an equal appreciation of the diversity of Canadian society. He was considered a very able Governor General, and gave his wife, Lady Maud Evelyn Lansdowne, a great deal of the credit for his success in Canada. One of her happiest and most successful endeavours while at Rideau Hall was a party she threw for 400 Sunday school children. Lady Lansdowne was decorated with the Order of Victoria and Albert and the Imperial Order of the Crown of India.

It is interesting to note that the Marquess of Lansdowne's military secretary, Lord Melgund, benefited greatly from serving the Governor General. He later became Lord Minto and served as Governor General between 1898 and 1904.

After studying at Eton and Oxford, the Marquess of Lansdowne succeeded to the title at the relatively young age of 21 in 1866. Three years later, he married Lady Maud Evelyn Hamilton and they had two sons and two daughters. The Marquess of Lansdowne served in the Gladstone government as a Liberal Member of Parliament from 1869 to 1872. He was appointed Under-Secretary of State for India in 1880, and having gained experience in overseas administration, was appointed Governor General of Canada in 1883.

He was appointed Viceroy to India the same year he left Canada, finally returning to England in 1894 to serve the British government until 1900.