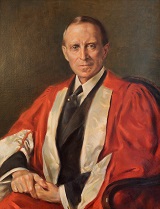 When Lord Tweedsmuir became Governor General, Canada was graced with a very literary viceregal couple. Lord Tweedsmuir was a prolific author, writing two or three books a year – his suspense novel Thirty-Nine Steps later became famous when Alfred Hitchcock made it into a movie. Lady Tweedsmuir wrote many books and plays under the name of Susan Buchan.

During his time as Governor General, Lord Tweedsmuir continued to write and his book Augustus, and his autobiography, Memory Hold-the-Door, were penned at Rideau Hall. While he pursued his own writing career, he also promoted the development of a distinctly Canadian culture. In 1936, encouraged by Lady Tweedsmuir, he created the Governor General's Literary Awards, which continue to be Canada's most prestigious recognition of literary merit.

Lady Tweedsmuir was active in promoting literacy in Canada. She used Rideau Hall as a distribution centre for 40,000 books, which were sent out to readers in remote areas of the west. Her program was known as the "Lady Tweedsmuir Prairie Library Scheme". Together, Lord and Lady Tweedsmuir established the first proper library at Rideau Hall.

Lord Tweedsmuir took his responsibilities in Canada seriously and tried to make the office of Governor General relevant to the lives of ordinary Canadians. In his own words, "a Governor General is in a unique position for it is his duty to know the whole of Canada and all the various types of her people".

Lord Tweedsmuir travelled throughout Canada, including the Arctic Circle. He took every opportunity to speak to Canadians and to encourage them to develop their own distinct identity. He wanted to build national unity by diminishing the religious and linguistic barriers that divided the country. Lord Tweedsmuir was aware of the suffering experienced by many Canadians due to the Depression and often wrote with compassion about their difficulties.

Lord Tweedsmuir was recognized by Glasgow, St. Andrews, McGill, Toronto and Montreal Universities, all of which conferred on him the degree of Doctor of Laws, and he was made an Honorary Fellow and an Honorary D.C.L. of Oxford.

When His Majesty King George V died in 1936, the front of Rideau Hall was covered in black crepe and Lord Tweedsmuir cancelled all entertaining during the period of mourning. The new heir to the throne, King Edward VIII, soon abdicated to marry Wallis Simpson – creating a crisis for the monarchy. However, when the new King, His Majesty George VI and Her Majesty Queen Elizabeth travelled throughout Canada in 1939, the regal visit – the first visit to Canada by a reigning Sovereign – was extremely popular.

Like many people of his time, the experience of the First World War convinced Lord Tweedsmuir of the horrors of armed conflict and he worked with both United States President Roosevelt and Prime Minister Mackenzie King in trying to avert the ever-growing threat of another world war.

While shaving on February 6, 1940, Lord Tweedsmuir had a stroke and injured his head badly in the fall. He received the best possible care – Canada's famous Dr. Wilder Penfield operated twice – but the injury proved fatal. On February 11, just 10 months before his term of office was to expire, Lord Tweedsmuir died. Prime Minister McKenzie King reflected the loss that all Canadians felt when he read the following words over the radio, "In the passing of His Excellency, the people of Canada have lost one of the greatest and most revered of their Governors General, and a friend who, from the day of his arrival in this country, dedicated his life to their service."

This was the first time a Governor General had died during his term of office since Confederation. After the lying-in-state in the Senate Chamber, a State funeral for Lord Tweedsmuir was held at St. Andrews Presbyterian Church in Ottawa. His ashes were returned to England on the warship H.M.S. Orion for final burial at Elsfield.

Long before his appointment to Rideau Hall, Lord Tweedsmuir was well known for his poetry, histories and novels. After studying at the universities of Glasgow and Oxford, he received a Master of Arts, and was then called to the Bar in 1901.

Lord Tweedsmuir married Susan Charlotte Grosvenor, cousin of the Duke of Westminster, on July 15, 1907. Together they had four children, two of whom would spend most of their lives in Canada.

Following the South African War, he worked with Lord Milner, High Commissioner in South Africa, in an effort to rebuild that country. During the First World War, he was a correspondent for the London Times in France before becoming Director of Information under Lord Beaverbrook in 1917. He held many positions including the president of the Scottish Historical Society, trustee of the National Library of Scotland, director of a publishing company and, on two occasions, was accepted as His Majesty's High Commissioner to the General Assembly of the Church of Scotland. When Tweedsmuir entered politics in 1927, he was elected member of Parliament for the Scottish Universities.

Upon accepting his appointment as Governor General of Canada, he also received a peerage, and was created Baron Tweedsmuir of Elsfield in the county of Oxford on June 1, 1935.