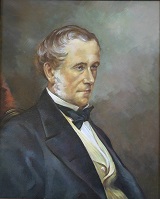 Lord Lisgar, Canada's second Governor General, was not shy about voicing criticism or strong opinions. While some resented his independent mind, Sir John A. Macdonald thought Lisgar the most able of the Governors General he had known. A review of Lord Lisgar's term of office and accomplishments explains this high regard.

Lord Lisgar was appointed Administrator of Canada from the time that Lord Monck left office in 1868 until he was sworn in as Governor General on February 2, 1869. In his first year in office, the Red River rebellion began under Louis Riel. On December 6, 1869, hopes of appeasement led him to declare an amnesty during the Riel confrontation. Then, in 1870, a rebel group of Irish-Americans, called Fenians, raided Canada in an attempt to win Irish independence from Britain. In both conflicts, Lord Lisgar was a wise mediator who helped lessen some of the potential bitterness. He also prevented the execution of the captured Fenian invaders by sending a sternly worded telegram to those who were ready to apply quick justice.

During this time of considerable turmoil, Canada was also experiencing a period of growth and increasing unity. Manitoba joined Confederation in 1870 and British Columbia, though still uncommitted, was considering union. When a delegation from British Columbia came in June 1870 to discuss joining Canada, Lord Lisgar spoke to them personally of the young country's wish to include the colony in Confederation. British Columbia joined Canada in 1871.

The proposed 1869 transfer of Rupert's Land from the Hudson's Bay Company to the Crown was delayed until 1870 by the Riel rebellion. In the interim, Lord Lisgar was the nominal Lieutenant Governor of the huge parcel of land. He was a strong supporter of Confederation and played a positive role in building a united Canada by touring the country extensively and promoting this goal.

Lord Lisgar made important advances in relations with the United States. He was the first Governor General to travel to the United States, meeting President Ulysses S. Grant and inaugurating a rail link between Boston and Portland with St. John and Fredericton, New Brunswick in 1871. In 1869 he also received the first royal visitor since Confederation – the 19-year old Prince Arthur, third son of Queen Victoria. Prince Arthur would return to Canada in 1911, as the Duke of Connaught, to be Governor General.

Lord Lisgar and his wife, Lady Adelaide Annabella Dalton Lisgar, added many important traditions to Rideau Hall. They held the first recorded New Year's Levee in 1869, while he was Administrator, and organized Christmas and Garden Parties. And in 1872, the noon gun firing on Parliament Hill was established, and the Governor General's Foot Guards army regiment was created. The first duty of the new regiment was to provide a guard of honour for Lord Lisgar on his departure from office in June of the same year.

Prior to coming to Canada, Lord Lisgar had gained extensive experience in both politics and colonial administration. Between 1831 and 1835, he sat as a member of Parliament in the British House of Commons. He married the 14-year-old Lady Adelaide Annabella Dalton on April 8, 1835. From 1841 to 1846, he occupied a cabinet minister's post in the government of Sir Robert Peel.

After completing his term of office in Canada, Lord Lisgar returned to Ireland. He was appointed Lord High Commissioner to the Ionian Islands from 1855 to 1859, followed by a post as the Governor of New South Wales, Australia, from 1860 to 1867. Lady Lisgar re-married twice after Lord Lisgar's death on October 6, 1876, and died in Paris on July 19, 1895 at the age of 74.