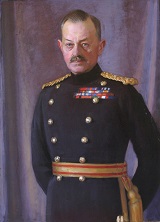 Lord Byng was well-known to Canadians before his appointment as Governor General. In 1916, during the First World War, he took command of the Canadian Army Corps on the western front. He gained his greatest glory with the Canadian victory at Vimy Ridge in April 1917, an historic military victory for Canada that inspired nationalism at home. During his travels across the country throughout his term of office, he was enthusiastically greeted by the men he had led.

Lord Byng's appointment was less controversial than that of his predecessor, the Duke of Devonshire. This was partly due to his popularity but also because he was appointed following direct consultation with the Canadian government. Lord Byng took to his office enthusiastically, further entrenching many of the traditions established by his predecessors. He also broke with tradition and was the first Governor General to appoint Canadian aides-de-camp -- one of them was Georges Vanier, who later served as Governor General from 1959 - 1967.

He was always passionate about sport, and both he and his wife particularly loved ice hockey – Lord Byng rarely missed a game played by the Ottawa Senators. In 1925, Lady Byng presented a trophy to the National Hockey League, which, to this day, recognizes sportsmanship and excellence in play.

Lord and Lady Byng also travelled more than any of their predecessors, making extended trips to western Canada and the North, taking the opportunity to meet with many Canadians. Lord Byng established the Governor General's Cup at the Royal Agricultural Winter Fair, and Lady Byng created a rock garden at Rideau Hall, which still delights visitors today.

The most notable issue during Lord Byng's term of office was the "King-Byng Affair" – a political crisis that arose between the Governor General and Prime Minister Mackenzie King. It was watched closely by both the Canadian and British governments, and came to redefine the role of Governor General.

Traditionally, the position of Governor General had represented both the Sovereign (the King or Queen of Canada) and the British government, a situation that had evolved with Lord Byng's predecessors and the Canadian government as well as the Canadian people into a tradition of non-interference in Canadian political affairs.

In September 1924, Prime Minister Mackenzie King requested a dissolution of Parliament to call an election, which Lord Byng granted. In the 1925 election, the Conservative party won the most seats, but not a majority. Counting on the support of the Progressive Party to overcome the Conservative minority, Mackenzie King, the Liberal Party leader, did not resign as Prime Minister and remained in power in the House of Commons until 1926.

Then, a political scandal in the Ministry of Customs and Excise became public, and in Parliament the Conservative Party alleged that the corruption extended to the highest levels of government, including the Prime Minister. Mackenzie King fired the Minister of Customs and promptly named him to the Senate, creating even more dismay among the members of the Progressive Party, who had already been withdrawing their support for the Liberal government.

Facing a third vote on the question of government corruption, and having already lost two previous votes on questions of procedure, Mr. King went to the Governor General seeking a dissolution of Parliament. Lord Byng refused the request and the crisis began. Prime Minister King requested that before any decision was made, Lord Byng consult the British government which he represented. Governor General Byng again refused, citing non-interference in Canadian affairs.

The next day, Mr. King presented Lord Byng with an Order-in-Council seeking the dissolution of Parliament, which Lord Byng refused to sign. As a result, Canada was left temporarily without a Prime Minister and government until the Governor General invited Arthur Meighen to form a government. Mr. Meighen did so, but within a week lost a non-confidence vote in the House of Commons. Prime Minister Meighen requested a dissolution of Parliament, which was granted by Governor General Byng, and a new election was called.

Politically, much was made of the 'Byng-King Crisis' during the election campaign. The Liberals were returned to power with a clear majority and Mackenzie King as Prime Minister. Once in power, Mackenzie King's government sought to redefine the role of Governor General as a representative of the Sovereign and not the British government, and this was soon put into effect.

On leaving Canada on September 30, 1926, the Byng's returned to England with many close friendships they had established while serving Canada. Lord Byng had worked to represent the interest of Canadians as much as possible, and despite the political crisis, did leave a much-respected man.

Lord Byng had studied at Eton, and then began a military career in which he saw service in India and in South Africa during the war of 1899 - 1900. During this campaign, he asked Marie Evelyn Moreton, the only daughter of Sir Richard Charles Moreton, comptroller at Rideau Hall during the term of office of the Marquess of Lorne, to marry him. He was so anxious to receive an answer that he asked her to send her reply by cable. Lord Byng framed her answer, "Yes, please return immediately", and kept it on his desk for the rest of his life. They were married on April 30, 1902, and had no children.

When the First World War came, Lord Byng first campaigned in France with the British Expeditionary Force as commander of the Cavalry Corps. Later, he commanded the 9th Army Corps in the ill-fated Dardanelles Campaign and supervised the withdrawal from the Straits. By 1916, he was given the command of the Canadian Army Corps. Following the victory at Vimy Ridge, Lord Byng took command of the 3rd British Army where he conducted the first surprise attack using tanks at Cambrai, considered a turning point in the war. For these services he was promoted to the rank of general, and after the war was raised to the peerage as 1st Baron Byng of Vimy of Thorpe-le-Soken, in Essex, on October 7, 1919.

Following his term as Governor General, Lord and Lady Byng returned to England where he was raised in the peerage as Viscount. He served as Commissioner of the London Metropolitan Police and was promoted to the rank of Field Marshal, finally retiring with his wife to Essex, England. Lord Byng died in 1935 and Lady Byng returned to Canada during World War II to live with friends. She died in 1949.