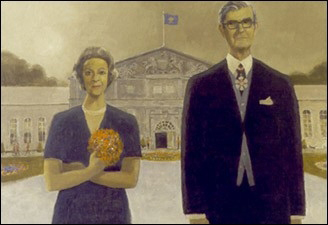 Six months after being sworn in as Governor General, Jules Léger suffered a stroke while at the University of Sherbrooke, Quebec where he was to receive an honorary degree. As he recovered from his stroke, Madame Léger played an important role. She replaced her husband at certain events and helped him in various duties, such as reading part of the Speech from the Throne. Her contributions to her husband's term were recognized by her inclusion in Mr. Léger's official portrait, which hangs in the Reception Room at Rideau Hall. Gabrielle Léger is the only spouse to have been featured in a portrait along with the Governor General.

In December of 1974, Jules Léger resumed his duties by presiding over an investiture of the Order of Canada, and a year later he welcomed Prince Charles. In 1976, after fire destroyed several rooms at La Citadelle, the Governor General's official residence in Québec, Madame Léger was actively involved in the restoration project.

The Légers travelled all across Canada after the full resumption of duties. Their desire to encourage excellence in cultural endeavours resulted in the Jules Léger Prize for New Chamber Music in 1978 and the Gabrielle Léger Medal for heritage conservation in 1979. Also in 1979, the Canadian government honoured the Légers by establishing the Jules and Gabrielle Léger Fellowship, which is awarded to outstanding Canadian scholars for research and writing on the role, function and historical contributions of the Crown and its representatives in Canada. As well, the Jules Léger Scholarship was established in 1974 at the University of Regina to promote academic excellence in bilingual programs.

When he retired in 1979, Jules Léger left a legacy of encouraging Canadian unity and humanity while introducing an intellectual aspect to the office of Governor General of Canada.

Jules Léger came from a deeply spiritual family; he was the younger brother of Cardinal Paul-Emile Léger. He married Gabrielle Carmel on August 13, 1938, and the couple had two daughters.

Studying first at the Collège de Valleyfield and then at the University of Montreal, he completed a degree in law prior to receiving a doctorate from the Sorbonne in Paris in 1938. He was an associate editor of Le Droit in Ottawa from 1938 to 1939, and from 1939 to 1942 he taught the history of diplomacy at the University of Ottawa.

Jules Léger joined External Affairs in 1940, the start of a successful career as a diplomat. In 1953 he became Canada's Ambassador to Mexico. He was later appointed as the Under-Secretary of State for External Affairs, and in 1958 was made Ambassador and Permanent Representative to the North Atlantic Council and Canadian representative to the Organization for European Economic Cooperation in Paris. In 1962 and 1964 he held posts as Ambassador to Italy and France respectively, followed by his appointment in 1973 as the Ambassador to Belgium and Luxembourg.

After leaving Rideau Hall, they continued to live in Ottawa. Jules Léger died on November 22, 1980; Gabrielle Léger died on March 10, 1998.