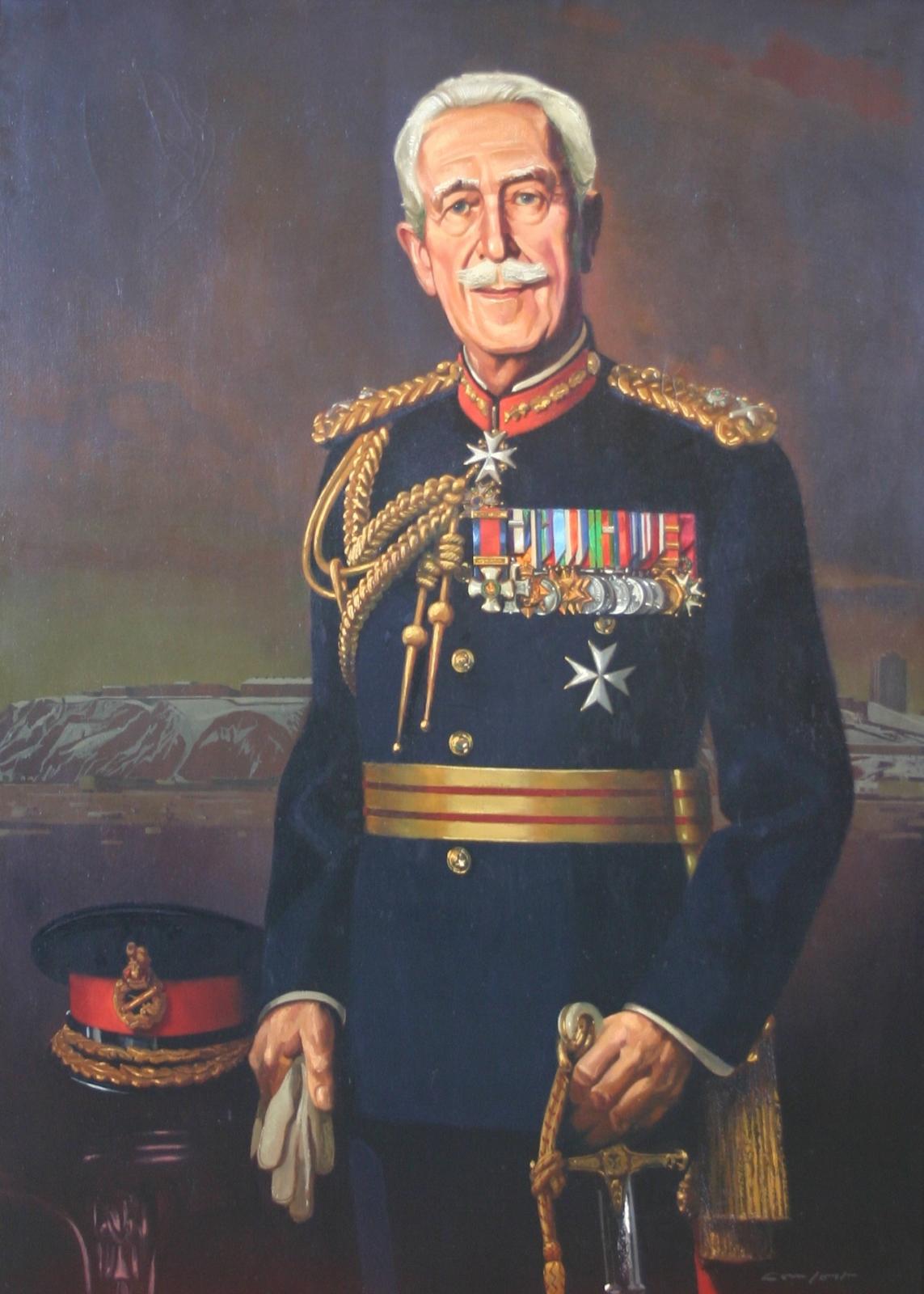 As a young man, Georges Vanier was appointed an aide-de-camp to then-Governor General Lord Byng, in 1921. He and his wife had been married less than a year when they came to live in Rideau Cottage, on the grounds of Rideau Hall. Thirty-eight years after that first introduction, Georges and Pauline Vanier came to live at Rideau Hall as the newly appointed viceregal couple.

The appointment of Georges Vanier was announced at a Cabinet meeting in Halifax presided over by Her Majesty Queen Elizabeth II. The respect and affection which General Vanier inspired made him an appropriate successor to the popular Governor General Vincent Massey.

Although Canada was experiencing turbulent times and General Vanier suffered from a heart condition, he reacted to the news of his appointment with the deep faith that was his constant companion. "If God wants me to do this job," he said, "He will give me the strength to do it." The Vaniers' strong religious beliefs led them to champion the disadvantaged, youth and the family. Their concern for the state of the family in Canada led them to organize the 'Canadian Conference of the Family' at Rideau Hall in 1964, which led to the founding of the Vanier Institute of the Family.

During General Vanier's term, the separatist cause accelerated in Quebec. General Vanier firmly believed in Canadian unity and his speeches often attempted to improve relations between Francophones and Anglophones. He possessed a masterful command of both languages and promoted a policy of bilingualism long before his tenure as Governor General. The depth of his concern for Canada is revealed in one of the last speeches of his life, where he said, "The road of unity is the road of love: love of one's country and faith in its future will give new direction and purpose to our lives, lift us above our domestic quarrels, and unite us in dedication to the common good... I pray God that we may all go forward hand in hand. We can't run the risk of this great country falling into pieces."

General Vanier's poor health never stopped him from making trips across Canada. His doctor worried that the cross-country tours would be too strenuous, but he always found both Vaniers invigorated on their return. The Vanier's travels increased the affection of the Canadian people for the viceregal couple, and they are remembered for their genuine kindness to all they met, especially their attention to children and senior citizens. Among his travels, he attended the inauguration of the St. Lawrence Seaway in Cornwall, Ontario on January 29, 1960, and was made Chief Big Eagle of the Blackfoot tribe in Calgary in June 1965.

In his journeys, General Vanier encouraged young people to work hard and achieve excellence. His commitment to youth was evident in his enjoyment of his role as Canada's Chief Scout and his active support of the Scouting movement. He initiated in 1967 the Vanier Awards for Outstanding Young Canadians, which recognized excellence in the Canadian Junior Chamber of Commerce. And to recognize excellence in public service at the federal, provincial or municipal level, the Vanier Medal of the Institute of Public Administration of Canada was established in 1962.

General Vanier was a great sports enthusiast who established both the Vanier Cup for the university football championship in the Canadian Intercollegiate Athletic Union and the Governor General's Fencing Award in 1965. Above all, he loved hockey and was an enthusiastic fan of the Montreal Canadiens hockey team.

During their time at Rideau Hall, the Vaniers hosted a long list of memorable guests. The distinguished visitors included United States President John Kennedy and Mrs. Jacqueline Kennedy, the Emperor of Ethiopia Haile Selassie, David-Ben-Gurion, Prime Minister of Israel, the Shah of Iran and General Charles de Gaulle, President of France. The Vaniers also made many changes made to Rideau Hall -- the chapel was re-established (the previous one had been removed in 1912), and the smoking room became the Canadian room (renamed The Pauline Vanier Room in 2003) with the addition of Quebec antiques and pine panelling.

Georges Vanier received several honours while he served as Governor General -- he was promoted to the rank of Major General in 1942 and appointed by the Queen to the Imperial Privy Council of the United Kingdom in 1963. He also received an honorary Doctor of Laws degree from the University of Toronto.

In 1966, General Vanier's strength was failing. Although the daily round of visits and tours did not diminish, he was increasingly feeble and tired. Then on Sunday March 5, 1967, the morning after watching a hockey game, General Vanier died. He was only the second Governor General to die in office since Confederation. His State funeral took place on March 8, 1967 at Notre Dame Cathedral in Ottawa, and his now famous son, the philanthropist Jean Vanier, read the lesson. The General's remains were interred on May 4, 1967 at the commemorative chapel at La Citadelle in Quebec City

Recognition of their love for humanity and deep spirituality recently led to Georges and Pauline Vanier's nomination for beatification in the Roman Catholic Church -- a tribute to this viceregal couple who exemplified noble qualities and cared so deeply for Canada and the Canadian people.

Georges Vanier studied at Loyola College in Montreal, and received a law degree at the Montreal branch of Université Laval. During the First World War, he was a founding member of the 22nd Battalion of the Canadian Expeditionary Force, the French-Canadian battalion that, in 1920, became the famous Royal 22e Régiment. He received the Military Cross in 1916, and the Distinguished Service Order, and Bar to the Military Cross in 1919. While leading an attack at Chérisy, France in 1918, he lost his right leg. After a long convalescence, he returned to Montreal to practice law. He married Pauline Archer on September 29, 1921, and the couple had five children.

In 1928, Georges Vanier began a long career in the diplomatic service when he was appointed to Canada's military delegation for disarmament to the League of Nations. Then in 1931, he was named Secretary to the Office of the High Commissioner in London. This was followed in 1939 with his appointment to the position of Canadian Minister to France -- a post he was forced to flee when the Nazis invaded in 1940. He was appointed commander of the military district of Quebec in 1941, and began an early policy of bilingualism in the army. By 1942, he was promoted to Major-General, and following the war was Canada's delegate at the Paris Peace Conference. He was appointed as Canada's first ambassador to France in 1944 and his distinguished service at this post continued until his retirement.

Before retiring in 1953, General Vanier once again served as Canada's representative to the United Nations. After retirement, he and his wife returned to Montreal where they became involved in social work in the city. Georges Vanier was also a director with the Bank of Montreal, Credit Foncier Franco-Canadien, and the Standard Life Assurance Company, and served on the Canadian Council of the Arts.

Prime Minister Pearson appointed Madame Vanier a member of the Privy Council, and she was sworn in on April 11, 1967. She was the first non-political woman to receive this honour, which was given to her because her husband died before the end of his term, which is when a Governor General is normally appointed a Privy Councillor. Madame Vanier was also among the first recipients of the Order of Canada, and was appointed as a Companion on July 6, 1967.

Pauline Vanier died in 1991 at "L'Arche", a community for handicapped adults founded by their son, Jean Vanier, in Trosly, France, at the age of 92. She was buried next to General Vanier at La Citadelle.