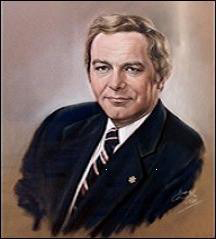 Mr. Schreyer was a strong advocate of Canadian unity and promoter of bilingualism. He travelled throughout the country, often to very remote regions, encouraging an atmosphere of goodwill and friendship between peoples and provinces. Lily Schreyer accompanied her husband on these tours, and her great popularity with Canadians enhanced their appearances.

During his term, Mr. Schreyer promoted the equality of women and the protection of the environment. In 1979, he established the Governor General's Award in Commemoration of the Persons Case to recognize the lengthy legal and political battle led by five Alberta women for Canadian women's constitutional right to be recognized as persons. His awareness of the importance of promoting environmental issues led to the creation of the Governor General's Conservation Awards in 1981. He also instituted the Edward Schreyer Fellowship in Ukrainian Studies at the University of Toronto. And in 1983, the first Governor General's Canadian Study Conference, which takes place every four years, was held.

Lily Schreyer's interest in issues affecting the family led her to become involved with many like-minded organizations such as UNICEF. She wanted the official residence to reflect this commitment and she and her husband opened the grounds to families from every background across Canada. Her concern for children and adults with physical disabilities prompted Mrs. Schreyer to have an accessible entrance and an elevator installed in the official residence. During the International Year of the Disabled, she inspired the construction of the Fountain of Hope, dedicated to Terry Fox, which is now in front of the main entrance at Rideau Hall.

Edward Schreyer studied at United College St. John's College and the University of Manitoba, earning a Bachelor of Pedagogy in 1959, the first of four degrees. He received a bachelor of education in 1962, a Master of Arts in International Relations and a second Master of Arts in Economics in 1963. His political career began when he was first elected to the Manitoba Legislative Assembly at the age of 22. He ventured into the academic world as a professor of International Relations at St. Paul's College of the University of Manitoba from 1962 to 1965. In 1965, he was elected to the House of Commons. On June 8, 1969, he was chosen leader of the New Democratic Party of Manitoba, and subsequently served as Premier of Manitoba from 1969 to 1977.

On June 30, 1960, Edward Schreyer married Lily Schulz, and the couple had two daughters, Lisa and Karmel and two sons, Jason and Tobin.

When his term of office ended in 1984, Mr. Schreyer announced that for five years his Governor General's pension would be used to fund the Canadian Shield Foundation, an organization that studies the flora and fauna of the Canadian shield and provides grant monies and employment in that area, and Mr. Schreyer continues to serve as its Chairman. Also that year he was sworn-in as a Member of the Privy Council. Mr. Schreyer was subsequently appointed High Commissioner to Australia.

He has since returned to Winnipeg, Manitoba, where he works as the national representative for Habitat for Humanity, a nonprofit housing organization. He is also Honorary Director of the Sierra Legal Defence Fund, and Honorary Advisor to the Canadian Foundation for the Preservation of Chinese Cultural and Historical Treasures and a Founding Member of the Winnipeg Library Foundation.

Lily Schreyer continues to have an interest and involvement in many organizations such as Girl Guides, Canadian Home and School, and others that address the needs of children. As a result of her long-time interest in arts and crafts, she works to raise the visibility and accomplishments of Canadian Crafts artists. She has been very generous in donating to charity the proceeds from the sale of her own paintings.