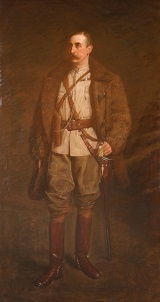 Long before his vice-regal appointment, Lord Minto spent several years in Canada serving as an Aide-de-camp to General Middleton during the North West Rebellion. On his departure home to England, Sir John A. Macdonald apparently said to him, "I shall not live to see it, but some day Canada will welcome you back as Governor General". Sir John A. Macdonald's prediction came true when Lord Minto was named Governor General of Canada in the summer of 1898.

Sir Wilfrid Laurier wrote that Lord Minto "took his duties to heart" and a review of his life reveals an energetic man who welcomed many challenges and responsibilities.

Governor General Minto's term of office was marked by a period of strong nationalism which saw economic growth coupled with massive immigration to Canada. Relations with the United States were strained as border and fishing disputes continued to create problems between the two countries.

In September 1901, after Queen Victoria's death in January, the Duke and Duchess of Cornwall and York (later to become King George V and Queen Mary) visited Canada, and travelled with Lady Minto to western Canada and the Klondike.

Lord Minto's convictions about the importance of preserving our heritage led to the creation of the National Archives of Canada.

Lord and Lady Minto were sports enthusiasts and the Minto Skating Club, which they founded in 1903, has produced many famous skaters. They both excelled at the sport and hosted many lively skating parties during their time at Rideau Hall. In the summer, the Minto family loved to bicycle and play lacrosse. In 1901, Lord Minto gave his name to the Minto Cup Canadian Lacrosse Association championship award. He loved the outdoors, championed the conservation of natural resources and promoted the creation of national parks.

In education and health, Governor General Minto encouraged a forward-looking approach. He believed that Canada's progress depended on the cultivation of patriotism and unity, and this conviction was reflected in his desire to see a wider history curriculum developed in Canadian schools. In response to the health crisis posed by tuberculosis, he helped establish the first anti-tuberculosis foundation in Canada.

Governor General Minto also took great interest in the development of the Canadian military and emphasized the need for training and professional development. He was appointed honorary Lieutenant Colonel of the Governor General's Foot Guards Regiment on December 1, 1898, and was subsequently appointed honorary Colonel, a tradition that has continued with the post of Governors General to this day.

On his trip back to England in 1904, having finished his term as Canada's Governor General, Lord Minto wrote in his journal ". . .so our life in Canada is over and it has been a great wrench parting from so many friends and leaving a country which I love, and which has been very full of interest to me".

Life before and After Rideau Hall

Before coming to Canada as Governor General, Lord Minto's life was one of accomplishment and adventure. After completing his education at Eton College and Cambridge University, he enlisted as an officer with the Scots Fusilier Guards in 1867, serving in the Russo-Turkish War of 1877 and the Afghan War of 1879. He acted as private secretary to Lord Roberts at Cape Colony in 1881 and was with the army occupying Egypt in 1882, thus furthering his military career and his experience of colonial administration.

In 1883, Lord Minto came to Canada as military secretary to Governor General Lansdowne. With him came his new wife, Mary Caroline Grey, sister of Earl Grey, Governor General from 1904-1911, whom he had married in England on July 28, 1883. On this first Canadian visit, he was very active in raising a Canadian volunteer force to serve with the British Army in the Sudan Campaign of 1884. He served as an aide-de-camp to General Middleton during the North West Rebellion of 1885. When he was offered command of the North West Mounted Police, he decided instead to pursue a political career in England.

His political aspirations were checked with his defeat in the1886 general election. He then applied himself with great enthusiasm to promoting a volunteer army in Britain. He organized a volunteer peacetime auxiliary regiment of the British Army, the Border Mounted Rifles, which he soon turned into one of the most efficient regiments in England.

After serving as Governor General of Canada from 1898 to 1904, Lord Minto became the Viceroy of India in 1905, where he instituted many reforms and carried on the traditions he had established in Canada. He retired to England in 1910 and, for his lifetime of service, was made a Knight of the Garter.