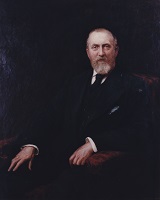 In 1893, Lord Stanley gave Canada a treasured national icon -- the Stanley Cup. He originally donated the trophy as an award for Canada's top-ranking amateur hockey club. Then in 1926, the National Hockey League adopted the Stanley Cup as the championship prize in professional hockey. That this now famous cup bears Lord Stanley's name is a fitting tribute to his encouragement and love of outdoor life and sport in Canada. In recognition of this, Lord Stanley was inducted into the Canadian Hockey Hall of Fame in 1945 in the "Honoured Builders" category.

During his term as Governor General, Lord Stanley travelled often and widely throughout the country. His visit to western Canada in 1889 gave him a lasting appreciation of the region's great natural beauty as well as permitting him to meet the people of Canada's First Nations and many western ranchers and farmers. He also experienced the joys of fishing and avidly pursued the sport whenever his busy schedule allowed.

When the Prime Minister died in office of heart failure on June 6, 1891, Lord Stanley lost the close friendship he had enjoyed with Sir John A. Macdonald. Lord Stanley asked Sir John Abbott to take over as Prime Minister. Once the administration was in place, Sir Abbott resigned due to illness and turned the government over to Sir John Thompson.

Lord Stanley helped cement the non-political role of the Governor General when he refused to agree to a controversial motion in the House of Commons. The motion called on him as Governor General to oppose the Jesuit Estates Bill passed by the government of Quebec. The opposition to the bill was introduced by the other provinces who were motivated by mistrust of the Roman Catholic Church in Quebec. Lord Stanley declined to interfere, citing the proposed disallowal as unconstitutional. In holding to this decision, he gained popularity by refusing to compromise the viceregal position of political neutrality.

Lady Stanley, whom Sir Wilfrid Laurier described as "an able and witty woman", made a lasting contribution during her husband's term of office. In 1891, she founded the "Lady Stanley Institute for Trained Nurses" on Rideau Street, the first nursing school in Ottawa. She was also an enthusiastic fan of hockey games on the Rideau Hall skating rink.

The son of the 14th Earl of Derby, a politician and British Prime Minister, Lord Stanley of Preston entered politics after having studied at Eton College and Sandhurst. He served briefly as an officer with the Grenadier Guards, but his family's prominent role in British politics soon called him to political life. He served as a Conservative member of parliament in the British House of Commons and a member of the cabinet. He married Lady Constance Villiers on May 31, 1864 and they had ten children.

Lord Stanley's term as Governor General of Canada was due to end in September 1893. However, in April of that year, his brother, the 15th Earl of Derby, died. Lord Stanley succeeded him as the 16th Earl of Derby. As a result, he left Canada on July 15, 1893 and returned to England. An Administrator was appointed to fulfil his duties until Lord Aberdeen was sworn in that September.

Back with his family in England, he soon became the Lord Mayor of Liverpool and the first chancellor of the University of Liverpool. During the last years of his life, he increasingly dedicated himself to philanthropic work. Lord Stanley died on June 14, 1908, and Lady Stanley died on April 17, 1922.