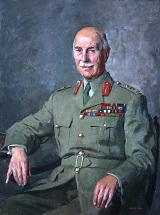 Following the sudden death of Lord Tweedsmuir while in office, the Earl of Athlone, uncle of King George VI, was approached to assume the post of Governor General. There had been calls from government and the media for a Canadian Governor General, but Prime Minister Mackenzie King did not feel the time was right for this. Canada had been at war since 1939 and the country was adjusting to the difficulties of committing military personnel and materiel to the war against Nazi Germany.

The trip to Canada with his wife, Princess Alice - a granddaughter of Queen Victoria - was complicated by the war, and their ship zigzagged across the Atlantic to avoid submarine attack. But they arrived safely in Halifax.

As World War II continued, the Earl of Athlone was very active in supporting the war effort by continuously inspecting troops, training schools and military hospitals. Princess Alice was Honorary Commandant of the Women's Royal Canadian Naval Service, Honorary Air Commandant of the Royal Canadian Air Force (Women's Division) and president of the nursing division of the St. John Ambulance Brigade. Lord Athlone travelled throughout Canada to encourage Canadians, and to let them know that Canada's Sovereign stood with them in fighting totalitarianism.

The Earl of Athlone and Princess Alice hosted Prime Minister Mackenzie King, British Prime Minister Winston Churchill and American President Franklin D. Roosevelt at La Citadelle in Québec on two separate occasions in 1943 and 1944. These meetings, known as the Quebec Conferences, helped decide the strategies of the Western Allies that would lead to victory over Nazi Germany and Japan in 1945.

Not everything was focussed on the war, though. The Earl of Athlone created the Athlone-Vanier Engineering Fellowship at the Engineering Institute of Canada, recognizing academic excellence, leadership and management potential. He also enjoyed the social activities around Ottawa, hosting tobogganing parties, skiing in Gatineau Park and learning how to skate.

The Governor General's office situated in the East Block on Parliament Hill was closed and moved to Rideau Hall in 1940. However, Rideau Hall’s main function during this period was as a temporary home for many stateless members of royal families displaced by the War, many of whom were relatives of the Lord Athlone and Princess Alice. Among the house guests were Crown Prince Olav and Crown Princess Martha of Norway, Grand Duchess Charlotte and Prince Felix of Luxembourg, King Peter of Yugoslavia, King George of Greece, Empress Zita of Austria and her daughters, and Queen Wilhelmina, Princess Juliana, Princess Beatrix, and Princess Margriet of the Netherlands. Princess Margriet was born in Ottawa at the Civic Hospital, where the delivery room was temporarily declared Dutch soil to ensure that the Princess was born in the Netherlands. To this day, Holland sends tulips to Ottawa to commemorate the assistance Canada gave to Holland.

Lord Athlone took part in the celebrations marking both victory in Europe and victory over Japan in 1945. And when he received an Honorary Degree from McGill University, he spoke about the future of young Canadians -- one not marked by war, but by reconciliation and reconstruction, in which Canada would play a leading role.

Lord Athlone witnessed major changes in Canada as it emerged from the war. The country was an independent nation with a strong, vital economy and active in world affairs.

Prince Alexander (he did not become the Earl of Athlone until 1917) came from a distinguished background. He was the son of the 1st Duke of Teck and Princess Mary Adelaide. A brother of Queen Mary's, he was the uncle of King George VI, Queen Elizabeth II's father. Following his education at Eton, Prince Alexander went into the military, training at the Military College at Sandhurst and was appointed Second Lieutenant with the 7th Hussar in 1894. He served in the Matabele campaign in Africa in 1896-96 with the 7th Hussars, and received the honour of being mentioned in dispatches. In the South African War of 1899 - 1901 he served with the Inniskilling Dragoons and awarded the Distinguished Service Order in 1900. In WWI, he was again mentioned in dispatches twice.

On February 10, 1904, he married Princess Alice Mary Victoria Augusta Pauline, daughter of Prince Leopold and granddaughter of Queen Victoria. They had three children, although one died within a year of birth, and another at age 20.

Originally, Prince Alexander had been appointed Governor General of Canada in 1914, but he convinced King George V to release him for wartime service. He acted as a Knight Grand Cross of the Order of St. John of Jerusalem and, from 1923 to 1930, served as Governor General and Commander-in-Chief of South Africa. Returning to England in 1931, he became Governor and Constable of Windsor Castle.