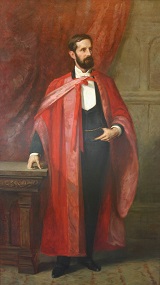 Even before Lord Aberdeen became Governor General in 1893, he and Lady Aberdeen had fallen in love with Canada. They had taken a world tour in 1890, which included an extensive visit to Canada. The Aberdeens were so impressed with this country that they purchased "Coldstream Ranch", located in the Okanagan Valley of British Columbia, in 1891. They named the ranch "Guisachan", after Lady Aberdeen's father's estate in Scotland, and the house stands to this day.

Lord Aberdeen was Governor General during a period of political transition, throughout the terms of four Prime Ministers – Sir John Thompson, Sir Mackenzie Bowell, Sir Charles Tupper and Sir Wilfrid Laurier. It was also an era of controversy marred by competing issues, from the abolition of separate French schools in Manitoba – which created a unity crisis – to the completion of the Canadian Pacific Railway to the discovery of gold in the Yukon Territory. Lord Aberdeen was well-equipped to take on the challenges of the position, with the experience and knowledge from his previous travels in Canada, and family history of success in this country – his father was instrumental in boundary negotiations between the United States and Canada.

Above all, Lord Aberdeen believed that, as Governor General, he could improve the well-being of Canadians generally, and he and Lady Aberdeen again travelled extensively throughout the country in an attempt to meet and talk with Canadians from all walks of life. This included a journey to the Maritimes where he met, among others, Dr. Alexander Graham Bell, as well as many inhabitants of Cape Breton who spoke Gaelic and were themselves from the highlands of Scotland. He also travelled west to meet with many people, including many First Nations peoples, and was made an honorary chief of both the Six Nations and Blackfoot people.

Lord and Lady Aberdeen participated in the celebration of Queen Victoria's Diamond Jubilee and the commemoration of various anniversaries and celebrations throughout Canada. Lord Aberdeen was also involved in the Canadian military. He conducted fleet inspections of the Canadian Navy on three different occasions and became Honorary Lieutenant Colonel of the Governor General's Foot Guards in 1898.

While her husband was in office, Lady Aberdeen made lasting contributions to Canadian society. She was the first president of the International Council of Women and encouraged the creation of the May Court Club. Her most significant achievement was establishing the Victorian Order of Nurses in 1897. This organization, dedicated to the care of ill people in their own homes, was at first mistrusted by the medical establishment, but Lady Aberdeen won its acceptance. Today, the VON continues to be a vital part of our health care system.

Lord Aberdeen's legacy was a reformed role in how the office of Governor General dealt with Canadian society. He and his wife had sought to show interest in the welfare of less privileged Canadians. By meeting Canadians in all regions of Canada and discussing their concerns, Lord Aberdeen transformed the role of Governor General from that of the aristocrat representing the King or Queen in Canada to a symbol representing the interests of all citizens. He had also sought to strengthen communication and trade links with the overseas Dominions, seeing the future benefits of openness between countries.

Following his education at St. Andrews and Oxford Universities, Lord Aberdeen succeeded to the earldom in 1870, assuming his seat in the House of Lords, where he was a close friend and supporter of Prime Minister Gladstone. This was followed by his marriage to Ishbel Maria Majoribanks in 1877. Together they had five children, although one died soon after birth. He gained experience in overseas administration with his appointment as Lord Lieutenant of Ireland in 1886, and he was also a representative of Her Majesty Queen Victoria at the General Assembly of the Church of Scotland.

After his term as Governor General of Canada, Lord Aberdeen returned to the United Kingdom and to the post of Lord Lieutenant of Ireland. Lady Aberdeen served as president of the International Council of Women until 1939. They continued their friendships with a number of Canadians until their deaths, Lord Aberdeen in 1934 and his wife in 1939.