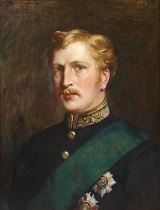 When Lord Lorne's appointment was announced, there was great excitement throughout Canada. For the first time, Rideau Hall would have a royal resident – Queen Victoria's fourth daughter, Princess Louise, had married Lord Lorne on March 21, 1871. The Canadian Prime Minister relaxed his busy campaign schedule to prepare for her arrival and to organize a special carriage and corps of guards to protect the princess.

During Lord Lorne's term of office, the recession plaguing the Canadian economy ended and Sir John A. MacDonald returned as Prime Minister. Canada was experiencing a renewal of optimism and an upswing of nationalism.

At age 33, the Lord Lorne was Canada's youngest Governor General, but he was not too young to handle the many demands of his post. He and Princess Louise made many lasting contributions to Canadian society especially in the arts and sciences. They encouraged the establishment of the Royal Society of Canada, the Royal Canadian Academy of Arts and the National Gallery of Canada, even selecting some of its first paintings. In addition to acting as a patron of arts and letters in Canada, Lord Lorne was the author of many books of prose and poetry. His writings show a deep appreciation of Canada's physical beauty.

Throughout his term of office, Lord Lorne was intensely interested in Canada and Canadians. He travelled throughout the country encouraging the establishment of numerous institutions, and met with members of Canada's First Nations and with other Canadians from all walks of life. At Rideau Hall, he and Princess Louise hosted many social functions, including numerous skating and tobogganing parties as well as balls, dinners and State occasions.

Princess Louise was an accomplished writer, sculptor and artist – she painted well in both oils and water colours. A door she painted with sprigs of apple blossoms can still be seen in the Monck wing corridor at Rideau Hall. She gave the name Regina (which is Latin for Queen) to the capital of Saskatchewan, and Alberta's Lake Louise was named after her. Although she was often unwell, she was a compassionate woman who, during an epidemic of scarlet fever, personally nursed the sick.

As the eldest son of the Argyll line of Campbells, Lord Lorne held the courtesy title of Marquess of Lorne from and was heir to the title of Duke of Argyll from 21 months until he was 54. He received an excellent education at Edinburgh Academy, Eton, St. Andrews and Cambridge. For ten years before coming to Canada, the Duke represented Argyllshire as a Liberal member of Parliament in the British House of Commons.

They returned to England in 1883. Lord Lorne was Governor and constable of Windsor Castle from 1892 to 1914, and he sat as a member of the House of Commons in England from 1895 until the death of his father on April 24, 1900, when he became the 9th Duke of Argyll. He and Princess Louise lived at Kensington Palace until his death in 1914. Princess Louise died on December 3, 1939, at the age of 91.