The Right Honourable David Johnston was invested as Canada’s 28th governor general on October 1, 2010, and served until the installation of Governor General Designate Julie Payette on October 2, 2017. His motto, CONTEMPLARE MELIORA (To envisage a better world), refers to his belief in the abilities of all Canadians to imagine and create a smarter, more caring nation and contribute to a fairer, more just world. 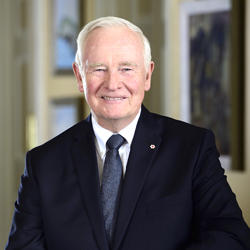 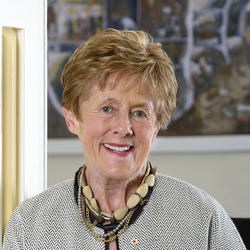 Sharon Johnston graduated from the University of Toronto in 1966 as a physical and occupational therapist, and subsequently worked in the area of child psychiatry. When the Johnston family moved to Montréal, she completed her master’s and doctorate degrees in rehabilitation science. 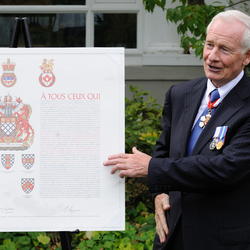 The pattern of interlaced diagonal stripes symbolizes the central role of family and other relationships in Mr. Johnston’s life, as well as his interest in communication networks and his belief in the interconnectedness of knowledge. 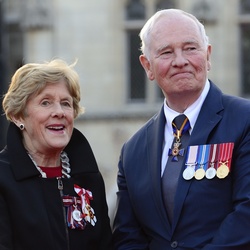 Highlights from the Mandate

When David Johnston became the 28th governor general of Canada on October 1, 2010, he called upon all Canadians to join in the building of a smarter, more caring nation. Alongside his wife, Sharon, Mr. Johnston sought to reinforce learning and innovation, encourage philanthropy and volunteerism, and support families and children.