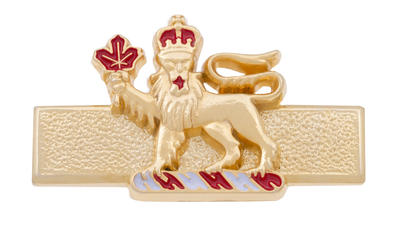 The Commander-in-Chief Unit Commendation may be awarded to any unit or sub-unit of the Canadian Armed Forces, or to any similar organization of a foreign armed force working with or in conjunction with the Canadian Armed Forces, that has performed an extraordinary deed or activity of a rare high standard in extremely hazardous circumstances. Commander-in-Chief Unit Commendations are restricted to war or war-like conditions in an active theatre of operations.

The Commander-in-Chief Unit Commendation is composed of scroll, insignia and pennant.

The framed gold-embossed scroll is inscribed with the name of the formation, unit or sub-unit concerned, bears an appropriate citation, and is signed by the governor general as the commander-in-chief of the Canadian Armed Forces.

The insignia is a gold bar with the viceregal lion in full colour.

The accompanying pennant is a permanent symbol of the award and may be flown or displayed as a public distinction.