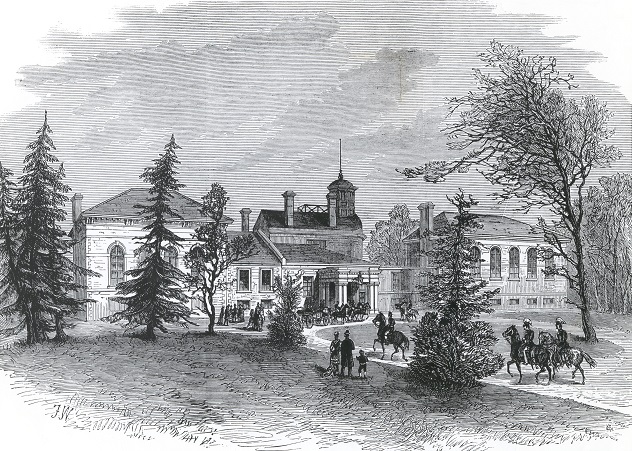 Rideau Hall has been the official residence of every governor general of Canada since 1867 and their workplace since 1940. It is a national historic site with nearly two centuries of history and has become an important gathering place and site of official activities.

The villa, which forms the main part of Rideau Hall, was built in 1838 by Thomas MacKay as a home for his family. A stonemason and contractor, he was also involved in building the entrance locks of the Rideau Canal and the mills at Rideau Falls. Rideau Hall is named after these landmarks. Period photographs show Rideau Hall as a stone villa with a three-storey, semi-circular south façade overlooking the gardens.

At the time when Ottawa—previously known as Bytown—was about to become the new capital of the province of Canada, the Canadian government leased and expanded the residence for Lord Monck, 21st governor general of British North America, who later became Canada’s first governor general. A long wing was added to resemble his Québec residence, Spencer Wood (which was renamed Bois-de-Coulonge in 1950). It was also during Lord Monck’s mandate that the handsome path leading to the front of the house was laid out.

In 1868, the year after Confederation, the Government of Canada purchased the house and grounds for $82,000 and declared it the official residence for Canada’s governors general.

In the time of Canada’s 3rd governor general, Lord Dufferin (1872–1878), the Ballroom and the Tent Room were built as wings on either side of the front entrance. The Tent Room was originally designed as both an indoor tennis court and reception room. It is now used for official and ceremonial functions.

The Minto Wing was added at the back of the residence in 1899 to provide more living space. Adjacent to the Minto Wing, the Governor General’s Study, with its window overlooking the gardens, was built in 1906 during the mandate of Earl Grey (1904–1911).

Many changes were made during the tenure of the Duke of Connaught (1911–1916). In 1913, work was completed on the interior entrance hall and the current front entrance. The front entrance features the massive Royal Arms, visible from the driveway and said to be among the largest in the world. Also in 1913, the Long Gallery was added and the Dining Room was enlarged. Concerned about the lack of sunlight in the residence, the Duke had many of the fir trees on the grounds replaced with maples and other species.

Over the years, various changes have been made to this important residence to meet the demands of modern times, including media and security requirements. The grounds, the building and its interiors have also evolved to better reflect and reinforce Rideau Hall’s identity as a national symbol. Over time, increasing emphasis has been placed on showcasing the Canadian collections throughout Rideau Hall, as well as the Canadian food and wines served, creating a truly Canadian environment, where Canadians are honoured, dignitaries are welcomed and affairs of State are conducted.

Rideau Hall is open to the public year-round. Find out more about what to see and do this season.