Home > About the Office > Our Structure > Associate Secretary 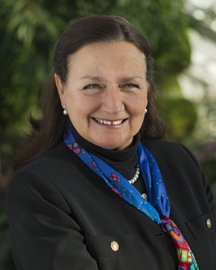 Marie-Geneviève Mounier was appointed associate secretary in the Office of the Secretary to the Governor General on February 14, 2018.

Ms. Mounier had served as assistant deputy minister of Sport, Major Events and Commemorations, at the Department of Canadian Heritage since March 2015. This position enabled her to contribute to the development and implementation of policies and programs designed to advance the Canadian sport system. She also oversaw the federal government’s participation in major sporting events in Canada (the Canada Games; the North American Indigenous Games; and the Pan Am and Parapan Am Games) and abroad (Rio 2016 Olympic and Paralympic Games, 2017 Jeux de la Francophonie in Abidjan).

While at Canadian Heritage, she was also responsible for overseeing the production of major events marking the 150th anniversary of Confederation: Christmas Lights Across Canada; the kickoff of Canada 150 celebrations on December 31, 2016; Winterlude; National Aboriginal Day; Saint-Jean-Baptiste Day; Multiculturalism Day; Canada Day (in the National Capital and in 18 other major urban centres across Canada) and the Northern Lights sound and light show on Parliament Hill.

From September 2010 to February 2015, she served as assistant deputy minister of Policy, Dispute Resolution and International Affairs, within the Labour Program at Employment and Social Development Canada. As head of the Federal Mediation and Conciliation Service, Ms. Mounier was tasked with advising the Minister and Deputy Minister on the application of Part I (Industrial Relations) of the Canada Labour Code, leading policy development and spearheading the government’s involvement in the International Labour Organization, the Inter-American Conference of Ministers of Labour, and the negotiation of international labour co-operation agreements.

From 2007 to 2010, Ms. Mounier served as assistant deputy minister of International and Intergovernmental Affairs and Sport at the Department of Canadian Heritage, where she coordinated the federal government’s contribution to and participation in (other than security and ceremonies) the 2010 Vancouver Olympic and Paralympic Games. She was also responsible for the ministry’s participation in TV5 Monde and other initiatives of the international Francophonie community.

Ms. Mounier has a Bachelor of Fine Arts degree from Concordia University and a graduate degree and master’s degree in public administration (international management) from the École nationale d’administration publique (ENAP).

Ms. Mounier enjoys travelling with her daughter, Catherine, who is currently completing a master’s degree in diplomacy and international law at the American University in Paris.