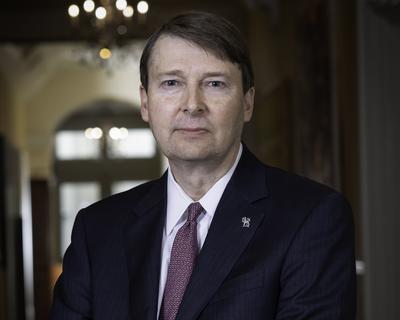 On February 1, 2021, Ian McCowan was appointed secretary to the governor general.

Mr. McCowan joined the Office of the Secretary to the Governor General (OSGG) following his tenure as deputy secretary to the Cabinet (Governance) at the Privy Council Office (PCO). In this role, he provided advice to the Prime Minister and the clerk of the Privy Council on a broad range of machinery of government and parliamentary issues. During this period, Mr. McCowan also served as deputy minister to both the leader of the Government in the House of Commons and the president of the Queen’s Privy Council.

Mr. McCowan also served at PCO as the assistant secretary to the Cabinet, (Communications) and as the policy assistant deputy minister for the Correctional Service of Canada (CSC). He began his career as a civil litigator with the Department of Justice. He also held management positions in the same department, serving as the director of legal services for both the CSC and the Parks Canada Agency.

Mr. McCowan holds a Master of Law degree from Cambridge, and bachelor’s degrees in laws and commerce from Queen’s University.