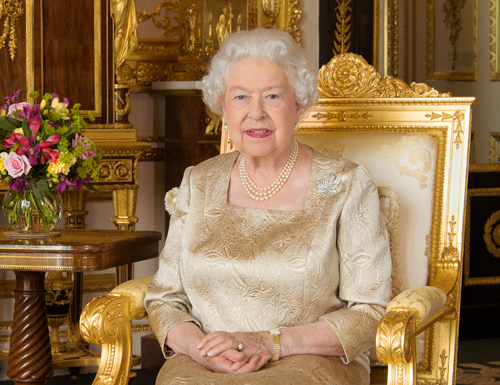 A photographic portrait of Her Majesty The Queen, was released by Buckingham Palace to mark the 150th anniversary of Confederation. The portrait, by Canadian photographer Ian Leslie Macdonald, was issued as Their Royal Highnesses The Prince of Wales and The Duchess of Cornwall were on a three-day tour of Canada, from June 29 to July 1, 2017

In the portrait, Her Majesty The Queen is wearing the Canadian maple-leaf brooch – made of platinum and set with diamonds – she inherited from her mother in 2002. The brooch was given to Queen Elizabeth the Queen Mother by her husband King George VI, to mark their visit to Canada in 1939. Over the years, the brooch was loaned to Princess Elizabeth in 1951, to the Duchess of Cornwall in 2009 and to The Duchess of Cambridge in 2011 for their first visits to Canada.

As regimental photographer to the 48th Highlanders of Canada Ian Leslie Macdonald also took an official portrait of Her Majesty in 2017 to commemorate The Queen's platinum anniversary as Colonel-in-Chief of the regiment. In 2012, Mr. Macdonald was awarded the Queen's Diamond Jubilee Medal for his service to Canada and the Crown.