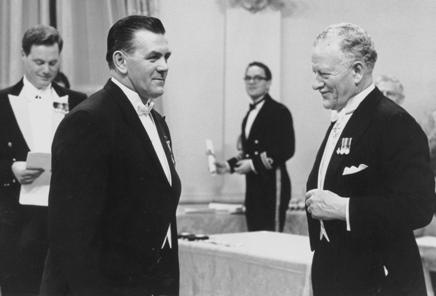 On a chilly afternoon on Friday, November 24, 1967, Rideau Hall, was being prepared to welcome guests and recipients for the first-ever investiture ceremony of the Order of Canada.

The Order of Canada had just been established in April of that year, and was one of the landmark achievements of Canada’s centennial year. Canada was defining itself as a nation—former Prime Minister Lester B. Pearson had given us our own flag two years before, in 1965—and a nation-building fervour was in the air.

The first list of Order of Canada recipients was announced on July 6—just a few days after Canada Day’s memorable centennial celebrations. The 90 appointees on that first list included both the nation’s great icons and its unsung heroes. They all reflected Canada’s most noble qualities and their accomplishments, like those appointed since then, have truly contributed to making this a better country.

As with today’s ceremonies, the first one took place in the Ballroom of Rideau Hall. Seventy-six recipients were in attendance, and the Order’s first appointment and first Companion was none other than the governor general of the day, the Right Honourable Roland Michener.

I firmly believe that the Order of Canada, the purpose of which is to recognize the outstanding service of Canadians to their country, will instill in us a greater sense of pride in being Canadian and reinforce the notion of our identity.

Other Canadian luminaries of that first ceremony included former governor general Vincent Massey; former mayor of Montréal Jean Drapeau; former prime minister Louis St-Laurent; writers and poets such as Hugh McLennan and Gabrielle Roy; neurosurgeon Wilder Penfield; and hockey legend Maurice Richard. After a brief reception, all the recipients and their guests were taken to Parliament Hill for a celebratory dinner in the Confederation Room of the West Block. (Today, Order of Canada dinners take place at Rideau Hall.)

Watch an archived video file of the first ever investiture ceremony

The sober, formal elegance of the first investiture ceremony helped to establish the Order of Canada as a noble and heartfelt way of giving thanks to the selfless men and women who strive to make our country a better place. A great tradition was born, one in which all of Canada could be celebrated, and to this day, the achievements of the Members, Officers and Companions of the Order inspire us all to reach new heights.

When the Order of Canada was first presented, its three levels were slightly different from the current format. In addition to the level of Companion (the highest level of the Order), there was a second level, the Medal of Service, and a third level in a separate category, the Medal of Courage, which was never awarded. Therefore, in its first five years, the Order had, in fact, only two levels.

The current levels of the Order—Member, Officer and Companion—were established in 1972. The Order’s two medals were abolished, and all the recipients of the Medal of Service (over 300 from 1967 to 1972) were awarded the status of Officer of the Order of Canada when the transition took place.