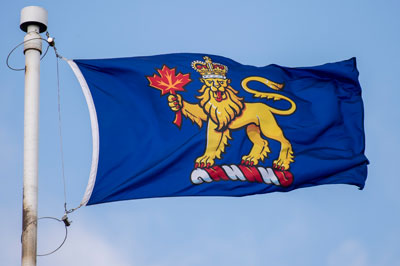 The governor general's flag is blue with the crest of the Arms of Canada in its centre. A symbol of the sovereignty of Canada, the crest consists of a gold lion wearing the Royal Crown and holding in its right paw a red maple leaf. The lion stands on a wreath of the official colours of Canada.

The flag was approved by Queen Elizabeth II, on February 23, 1981, and it follows the general pattern of the governor general's flag in use since 1931.