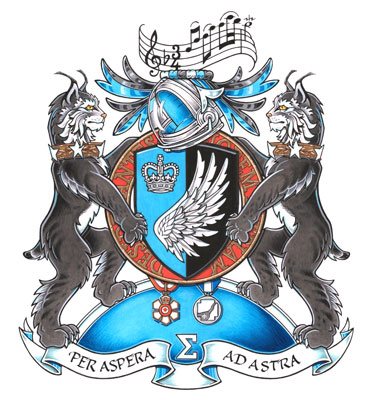 A symbol of exploration and liberty, an open wing embodies our desire to reach higher and expand our horizons. As with birds protecting their young, the wing also conveys the strength and safety of family ties. Moreover, it represents Ms. Payette’s career as an aviator and astronaut. The Royal Crown symbolizes the viceregal office and service to all Canadians.

The astronaut’s helmet represents the never-ending quest for knowledge, a quest that extends beyond the frontiers of the known world.

At the top, a musical stave, a melody, symbolizes the creativity, sensitivity and remarkable virtuosity of human beings. The first notes of the second movement of Alessandro Marcello’s “Oboe Concerto in D Minor” evoke Ms. Payette’s lifelong interest in singing and classical music, particularly from the Baroque period.

Meaning “Through hardship to the stars,” the Latin phrase PER ASPERA AD ASTRA is the motto used by Ms. Payette and her fellow astronauts. Whatever the difficulties or challenges, perseverance and effort always bear fruit. There is hope in every situation; we simply need to look for it.

Making a nod to the cat perched atop “La fusée de Julie,” the emblem created by Quebec artist Gérard Dansereau of Ms. Payette’s first space mission, STS-96, the two lynx, proud and strong, represent us, the people of Canada. An elusive feline, the Canada lynx is remarkably well adapted to northern territories, particularly because of its enormous paws that allow it to move easily through the snow. The stars around their necks represent the spark of passion in each of us, inspiring us to dare to dream. They also evoke space travel and the work environment of astronauts. The laurel leaves – laurier in French – depicted alongside the stars represent Laurier, Ms. Payette’s son.

Represented here as seen from space, without borders and surrounded by a thin layer of atmosphere, our planet resembles a blue marble on a backdrop of darkness. It remains the only place where humans can live. The mathematical symbol for the sum, Σ (sigma), placed in its centre, illustrates the power of facts and science, and reminds us that we share the Earth and a responsibility to care for it.