The Governor General undertook an official visit to Manitoba on November 26 and 27, 2018.

She had an opportunity to witness the dynamic Franco-Manitoban community at the Université de Saint-Boniface and during a lunch at Fort Gibraltar.

She also visited the University of Manitoba and had an opportunity to see the incredible work being done by Bear Clan Patrol volunteers. 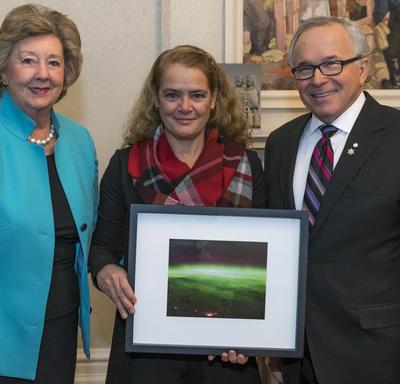 Upon arrival in Manitoba, Her Excellency met with Their Honours the Honourable Janice C. Filmon, Lieutenant Governor of Manitoba, and the Honourable Gary Albert Filmon and presented them with a picture of the province taken from space. 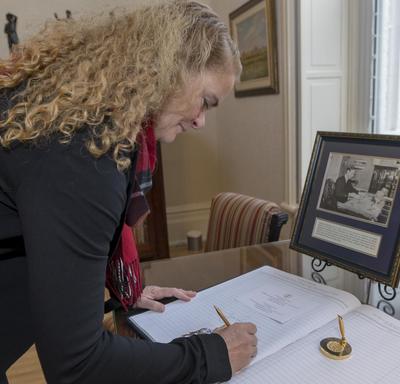 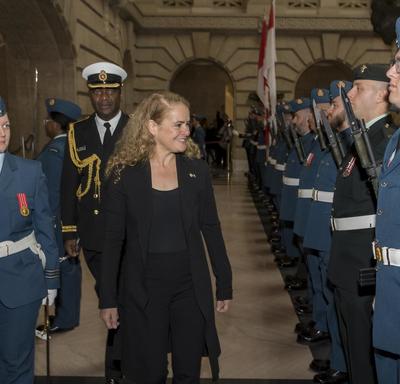 Her Excellency was officially welcomed to the province during a ceremony where she received military honours that included a guard of honour, the “Viceregal Salute” and a 21-gun salute. 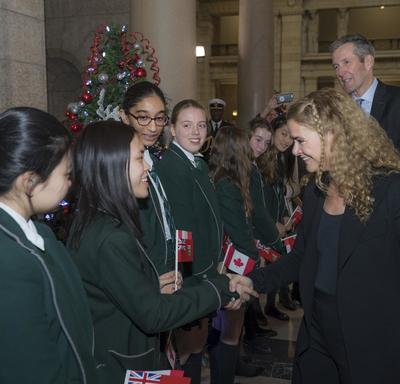 Her Excellency took the time to speak to students present at the welcoming ceremony. 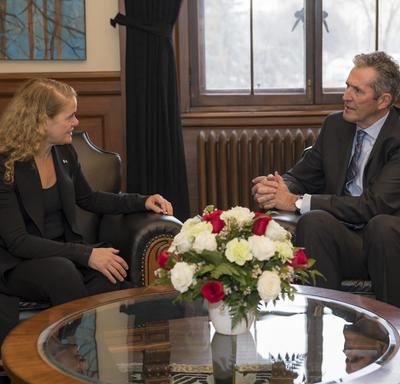 Afterwards, Her Excellency met with the Honourable Brian Pallister, Premier of Manitoba. 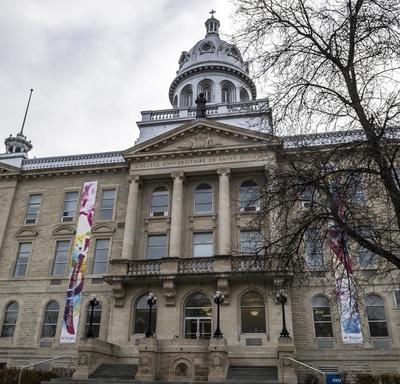 Next, the Governor General visited Université de Saint-Boniface on the occasion of its 200th anniversary. 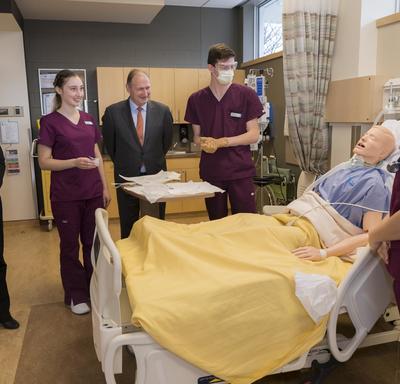 At Université de Saint-Boniface, Her Excellency toured the nursing science laboratory where she saw students practising their nursing skills on mannequins. 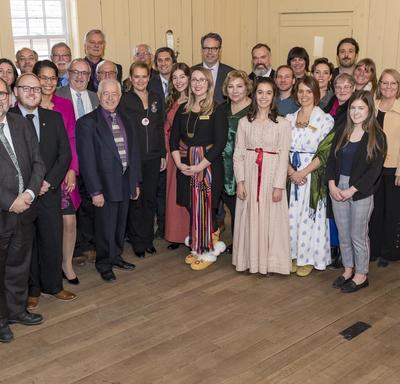 Afterwards, Her Excellency participated in a celebration of Francophone culture at Fort Gibraltar. 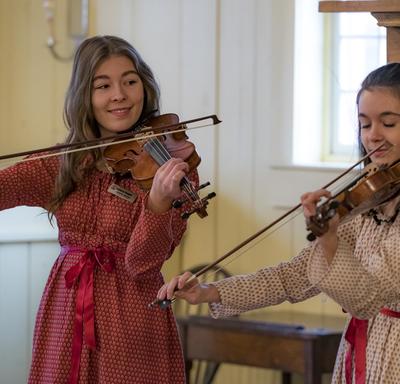 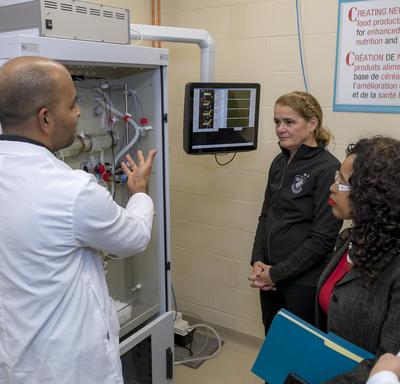 In the afternoon, the Governor General visited the University of Manitoba, where she toured the  Richardson Centre for Functional Foods. 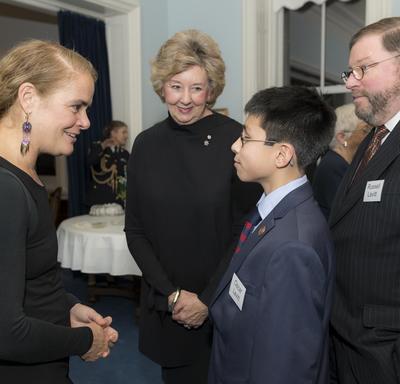 In the evening, the Governor General went to a reception, where she met and spoke with key provincial leaders and with people who have contributed to their communities. 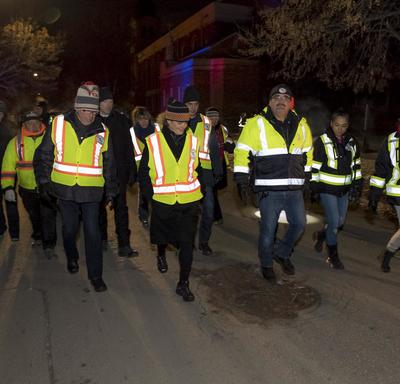 Later, the Governor General had an opportunity to see first-hand the incredible work being done by the volunteers of the Bear Clan Patrol to keep the community safe.

On her second day of the visit, the Governor General visited the Canadian Museum for Human Rights followed by the Canadian Forces Base 17 Wing Winnipeg, where she met with members from the Combined Air Operations Centre, 402 Squadron and 435 Squadron. 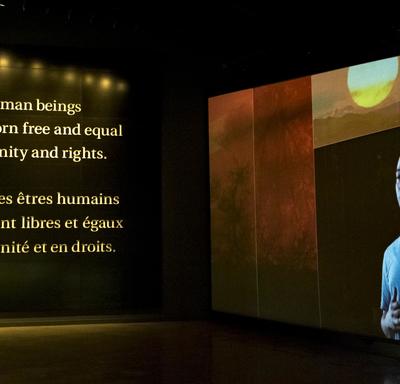 The Canadian Museum for Human Rights is the first museum solely dedicated to the evolution, celebration and future of human rights. 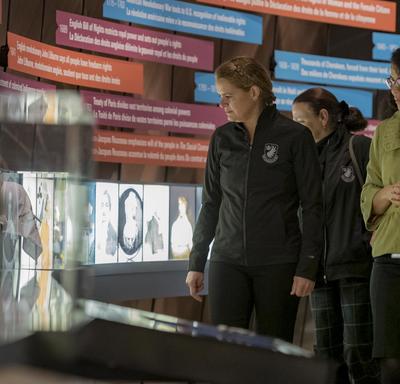 Her Excellency spent the morning touring the Canadian Museum for Human Rights. 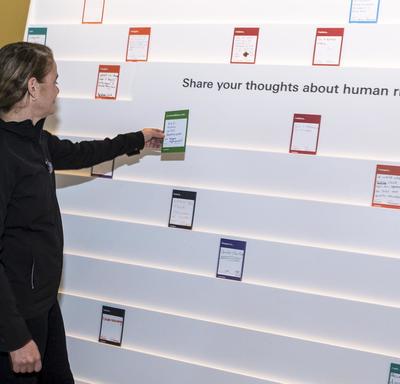 Her Excellency placed a card on the human rights wall to share her thoughts about human rights, specifically about reconciliation. 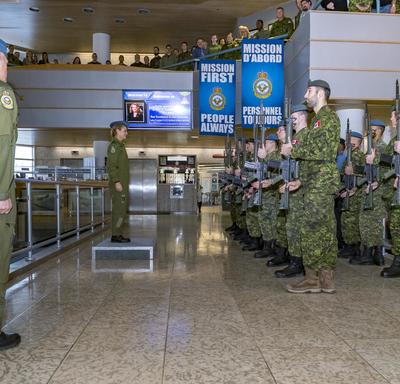 Upon arrival at Canadian Forces Base 17 Wing Winnipeg, Her Excellency was greeted by a guard of honour. 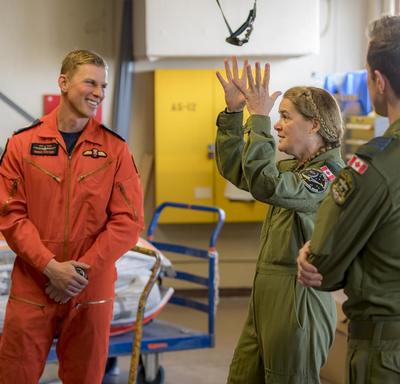 The Governor General met with members from 435 Squadron to learn more about their transport and rescue mission.