Home > Activities > 2018 > Investiture into the Order of Military Merit

The Governor General and Commander-in-Chief of Canada presided over an Order of Military Merit investiture ceremony at the Canadian War Museum, on Tuesday, November 6, 2018.

November 2018 marks 100th anniversary of the Armistice of the First World War. The tradition of exemplary dedication within the @CanadianForces continues today with the investiture of 69 servicemen and women to the Order of Military Merit. #Armistice100 #CanadaRemembers pic.twitter.com/OJm3pTgXpR

Created in 1972, the Order of Military Merit recognizes distinctive merit and exceptional service displayed by the men and women of the Canadian Armed Forces, both Regular and Reserve. Many have demonstrated dedication and devotion beyond the call of duty, and the Order honours them for their commitment to Canada.

On this occasion, the Governor General bestowed the honour on 1 Commander, 14 Officers and 54 Members. 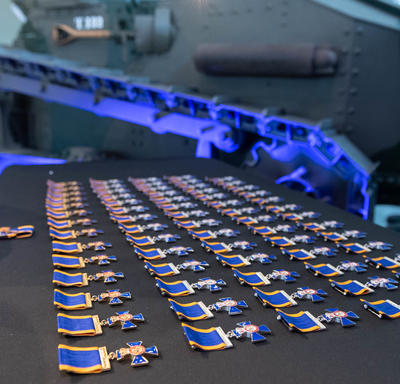 A table lined with Order of Military Merit insignias.

In the centennial year of the Armistice, the governor general delivered a speech in which she spoke of the importance as well as the human cost of Canada’s contribution in the First World War.  Today, she explained, we honour the memory of those who fought in that conflict and celebrate the continued dedication and excellence of those who serve in today’s Canadian Armed Forces.  This ceremony, she continued, is an occasion to honour the courage and sacrifice of everyone who has served in uniform for Canada, so that that we can all together help build a more peaceful world.