Today, Ms. Julie Payette was installed as the 29th governor general of Canada.

This momentous day started with the installation ceremony inside the Senate Chamber, on Parliament Hill, and was followed by military honours and the inspection of a guard of honour outside of Parliament. Ms. Payette will then lay flowers at the National War Memorial, before arriving at Rideau Hall, the official residence and workplace of the governor general in Ottawa. The day will conclude with an evening reception at the Canadian Museum of History. 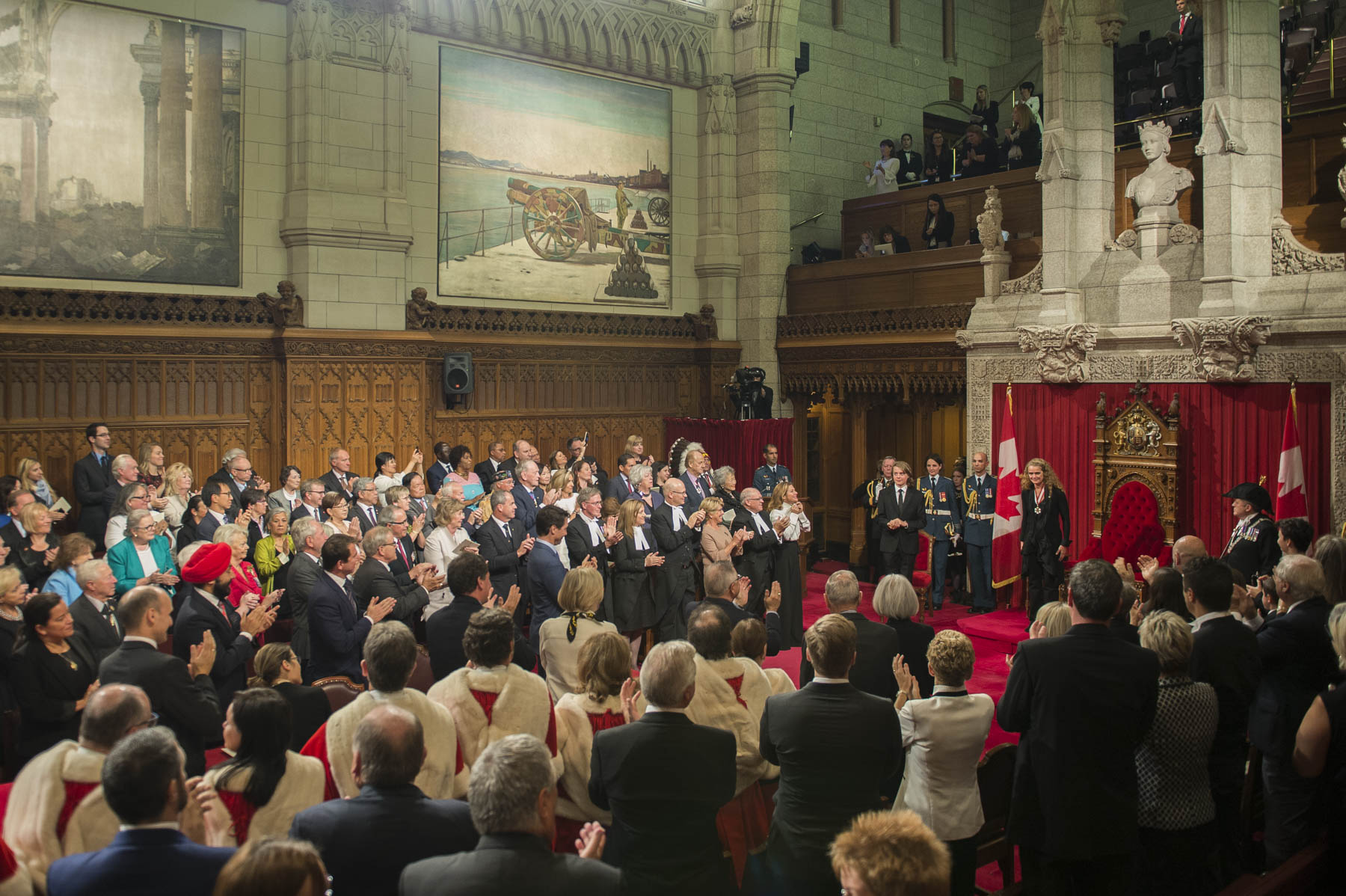 “My friends, aim high, dare to dream. The sky has no limit. To a life that unites us.”

With these words, newly installed Governor General Julie Payette concluded a historic installation address in the Senate and launched her mandate as Canada’s 29th viceregal representative. In keeping with her motto PER ASPERA AD ASTRA—“Through hardship to the stars”—Her Excellency’s speech resounded with a call for all Canadians to come together, to be ambitious and to work hard at extending the frontiers of human achievement while tackling the pressing challenges of our time.

“Together, as the adage says, we can move mountains, can’t we?” said Her Excellency, who served as a mission specialist and as flight engineer during two international missions to space. “I am an optimist but also a pragmatist. It was clear, with the success of the International Space Station (ISS), that we can always do better together than on our own. The whole is greater than the sum of its parts.”

Delivered in three languages—Algonkian, French and English—Her Excellency’s address was the centrepiece of a remarkable installation ceremony full of protocol, symbolism and musical performances rooted not just in the history and culture of Canada, but of the world. From the opening notes of “Fanfare for the Common Man”—a musical work by composer Aaron Copland that was played as a wake‑up call for astronauts each morning aboard the ISS—to the closing of Quebec superstar Ginette Reno’s powerful rendition of “O Canada,” the ceremony left no doubt this would be a mandate devoted to pushing boundaries and thinking big.

#GGDJuliePayette has arrived in the @SenateCa Chamber. The installation ceremony will now commence. #GG29 pic.twitter.com/uqEEnyAqM1

Born in Montréal, Her Excellency has worked as an astronaut, engineer, scientific broadcaster and corporate director. As Prime Minister Justin Trudeau said in his introductory speech, Ms. Payette is also “an agent of change, a powerful voice for progress, and a two-time extraterrestrial Canadian!” An accomplished musician, her passion for music was reflected throughout the installation ceremony in moving performances of Leonard Cohen’s classic song “Hallelujah” by Joannie Benoit and Melissa Bédard and of Mozart’s “Divertimento in D Major, K. 136: Allegro” by Tafelmusik. Her Excellency’s route to becoming governor general was also referenced in Quartom’s rendition of Félix Leclerc’s classic “Moi mes souliers,” which tells the story of an individual’s journey through life.

The song 'Moi mes souliers' written by Félix Leclerc and performed by Quartom reminds us of one's journey through life. pic.twitter.com/0rbJQn3gHD

In her speech to all Canadians, Her Excellency acknowledged her surprise at being asked to serve as governor general. “But when duty calls, there is only one answer,” she said.

“I believe that we here in Canada are in a position now more than ever to make a difference,” she continued. “Because we are rich: rich in values, openness, tolerance, mutual co-operation and compassion, and because we have decided as a people to share our gifts as much as possible. Because we believe in equality of opportunity for everyone. And I am a product of this country. I truly believe that these very fundamental values unite us all.”

A 12th generation Canadian, Her Excellency spoke of her family’s deep ties to Canada, beginning with her ancestor Pierre Payette dit St-Amour, a soldier who arrived in New France in 1665 and settled on the island of Montréal. Another ancestor, Franҫois Payette, was a coureur des bois  and translator of Indigenous languages who worked with the Hudson’s Bay Company in the northwest and whose memory survives to this day in the form of a city, a county, a river and a national park that bear the name “Payette” in the U.S. state of Idaho.

“Clearly, I am proud of my roots,” Her Excellency said. “But I long ago realized that all of our ancestors, mine included, had been guided and helped by extraordinary peoples. First Nations, with their ingenuity, generosity and courage, through mountains, forests and waterways, opened the land for the rest of us. They were the first pioneers on this land, and they continue to be.”

Her Excellency went on to highlight the necessity of once again listening to Indigenous peoples in today’s context, as well as the need to achieve reconciliation in Canada “for the well-being of our communities and the future of our children.”

Prior to receiving the Great Seal of Canada and entrusting it to the Registrar General, Ms. Payette was formally presented with the Canadian Honours System’s collars of office by Emmanuelle Sajous, Deputy Secretary of Honours, and Claire Boudreau, Chief Herald of Canada. The collars confirmed the Governor General’s responsibilities as chancellor of the Order of Canada, the Order of Military Merit and the Order of Merit of Police Forces, as well as head of the Canadian Heraldic Authority.

.@GGJuliePayette has been presented with four collars. Each collar confers the following titles: #GG29 pic.twitter.com/0dB0M8z9Eo

Making a link between excellence and the great importance of education and of having a support structure in place to succeed, Ms. Payette paid tribute to her parents, who “gave me wings.” She concluded with a passionate call to Canadians to be curious and to work together in creating a knowledge-based society that cares for all people and for our planet.

“One of the great privileges we have—those of us who have had the opportunity to see the Earth from above and to go into space—is to see this planet we share, all 7 billion, 751 million of us here on Earth. We are all part of the human race, and we share this extraordinary world—a world that so resembles a blue marble on a backdrop of darkness, surrounded by its finite atmosphere. Borders are the invention of mankind. This Earth, this planet, is ours to pass on to future generations in good shape. And it is this notion that should guide us in all of our choices and all of our decisions. Seeing how many young people are here today, I am optimistic about the future.”

The singing of the national anthem by @GinetteRenoVIP concludes the installation ceremony. pic.twitter.com/Mr8lV62mQQ

After the installation ceremony and a closing musical performance by Florent Vollant in the Senate Foyer, Her Excellency proceeded outside, where she took her place for the “Royal Salute,” and a flypast of CF-18s. To the sound of booming artillery guns, she inspected the Guard of Honour before leading a procession on foot to the National War Memorial, where she and her son laid a bouquet of flowers on the Tomb of the Unknown Soldier.

On this day of tragic events, let's not forget those who sacrificed their lives and helped shape this country I will serve once again. #GG29 pic.twitter.com/5t1HzBXG0p

Following a moment of silence at the memorial, Her Excellency departed for Rideau Hall, her official residence. An inspection of the Guard of Honour, comprised of members of the household regiments, the Governor General’s Foot Guards and the Canadian Grenadier Guards, followed.

As commander-in-chief of the @CanadianForces, @GGJuliePayette conducted her first inspection of the ceremonial guard at #RideauHall. pic.twitter.com/zWXFI3ndMI

A Historic Day for Canada

The installation of a new governor general is an event of national importance which marks a new chapter in our country’s constitutional monarchy. Relive this historic day by watching the installation ceremony in its entirety. 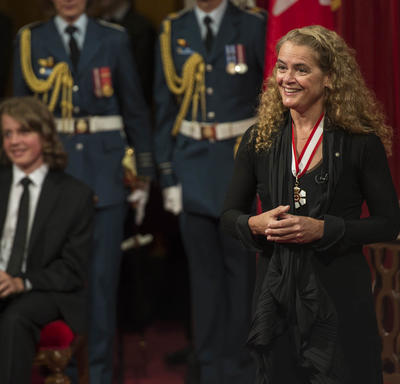 Her Excellency then delivered her installation speech. 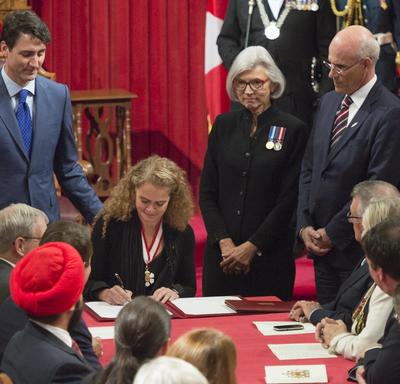 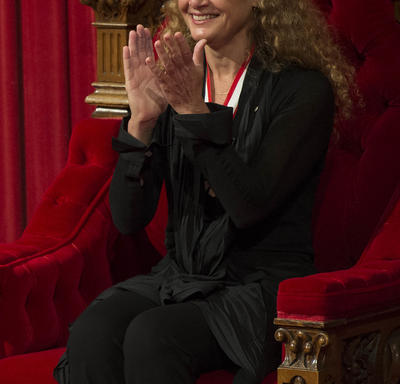 The Governor General applauded the artistic and cultural performances. 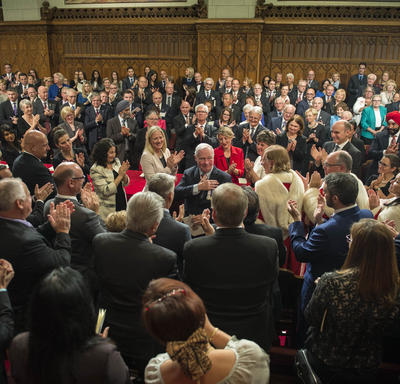 Mr. and Mrs. Johnston were thanked for their seven-year service and received a standing ovation during the ceremony. 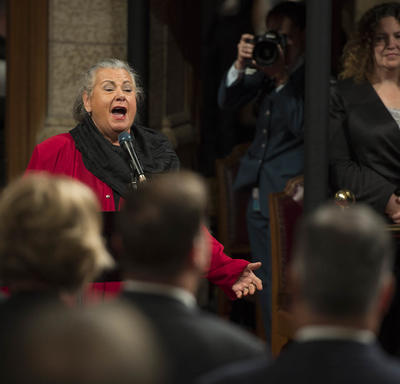 The installation ceremony ended with the national anthem sung by Ms. Ginette Reno. 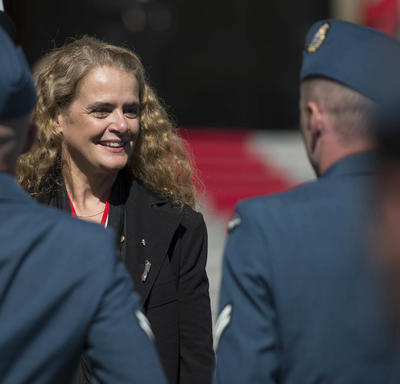 Her Excellency stopped to talk to members of the guard of honour. 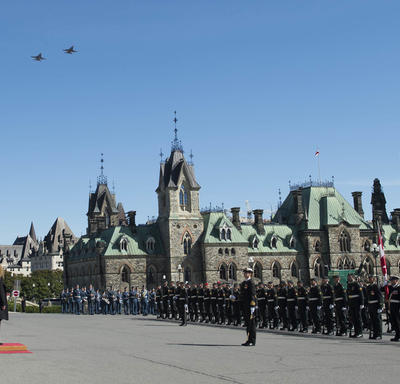 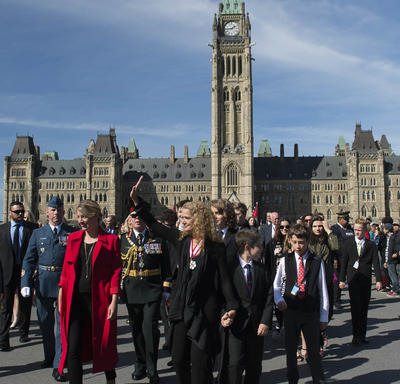 Her Excellency then walked from Parliament Hill to the National War Memorial. 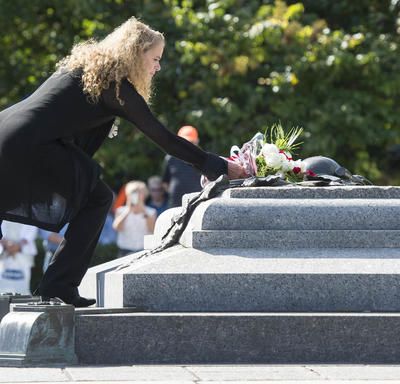 Her Excellency layed flowers at the Tomb of the Unknown Soldier to honour and remember Canadians who lost their lives fighting on behalf of their country. 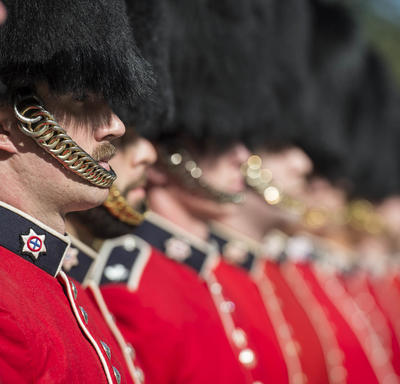 The 100-person guard of honour was composed of men and women from the Canadian Grenadier Guards and the Governor General’s Foot Guards, two of the household regiments. 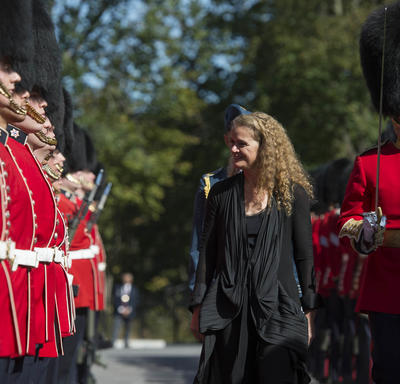 Her Excellency also inspected the guard of honour at Rideau Hall before making her way inside her new residence and workplace. 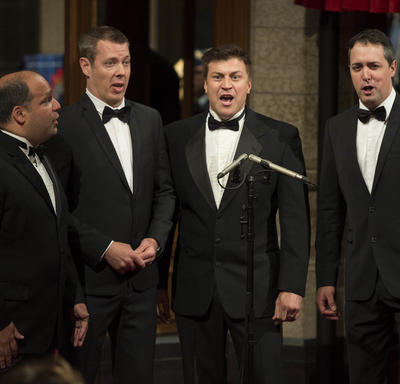 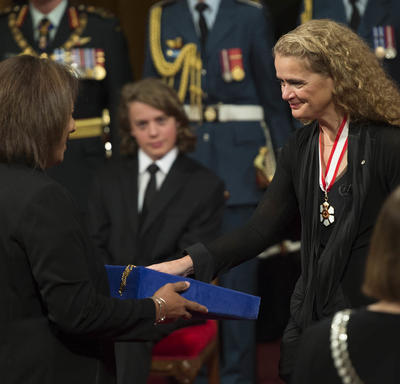 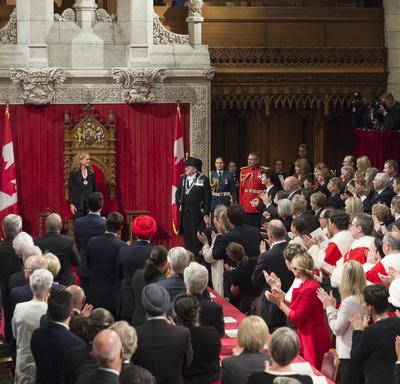 Those in attendance warmly applauded Ms. Payette as the new Governor General of Canada. 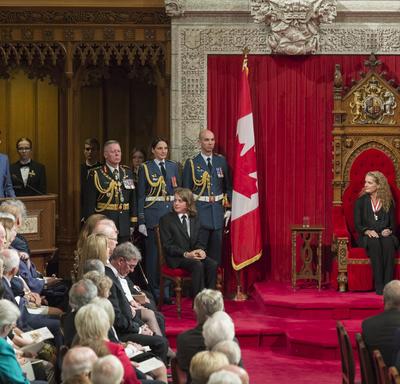 The Right Honourable Justin Trudeau, Prime Minister of Canada, addressed those in attendance. 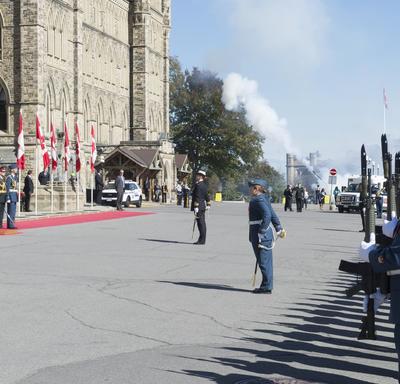 Following the ceremony, Ms. Payette stepped outside Parliament to receive military honours, including a Royal Salute and a 21-gun salute. 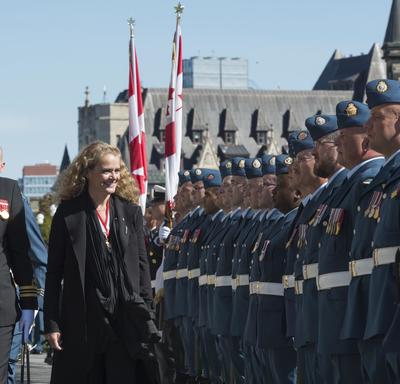 She then inspected the guard of honour for the first time as Commander-in-Chief of Canada. 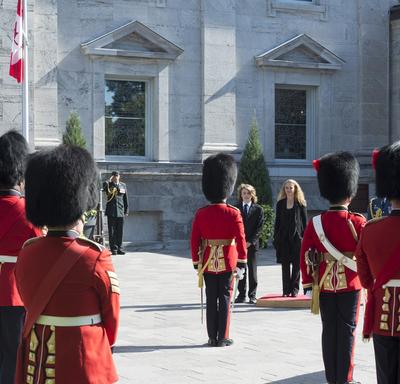 Upon her official arrival at Rideau Hall, the Governor General was greeted by a 100-person guard of honour. 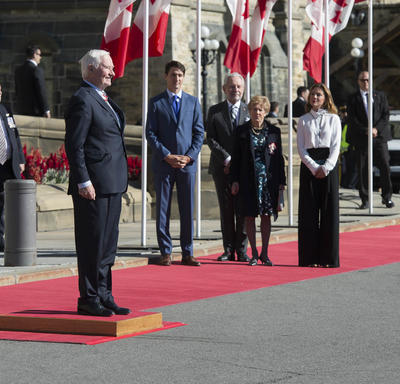 Upon his arrival at Parliament Hill, His Excellency the Right Honourable David Johnston, 28th Governor General of Canada, received a Royal Salute from the Canadian Armed Forces guard of honour. 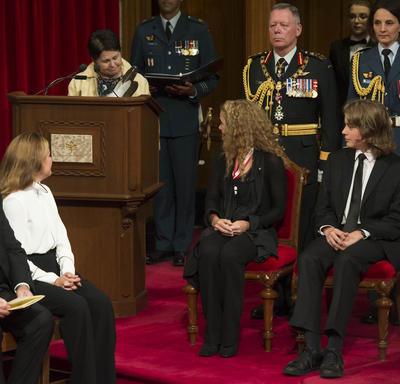 Ms. Claudette Commanda, Algonquin Elder, offered the opening prayer at the beginning of the installation ceremony. 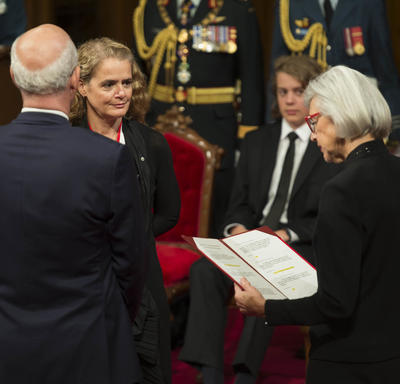 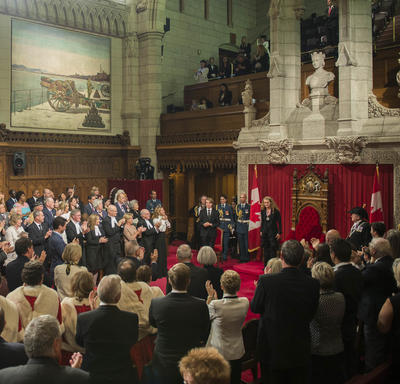 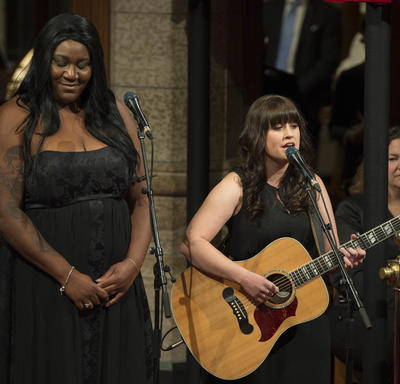 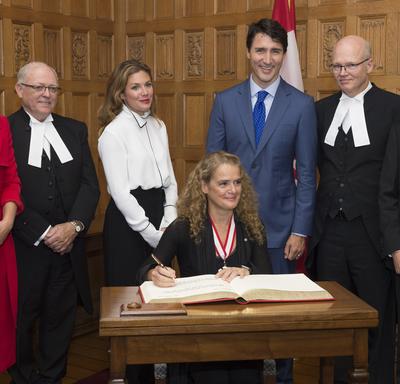 The Governor General signed the proclamation marking her accession.

Following the installation ceremony, Her Excellency walked from Parliament Hill to the National War Memorial to lay flowers to honour and remember Canadians who lost their lives fighting on behalf of their country.

Upon her arrival at Rideau Hall, Her Excellency inspected a 100-person guard of honour composed of men and women from the Canadian Grenadier Guards and the Governor General’s Foot Guards, two of the household regiments.

In the evening, a reception in honour of Ms. Payette’s installation as Canada’s 29th governor general was hosted by the Government of Canada.

The coat of arms of Ms. Julie Payette, 29th Governor General of Canada, was unveiled on the occasion of her installation day. 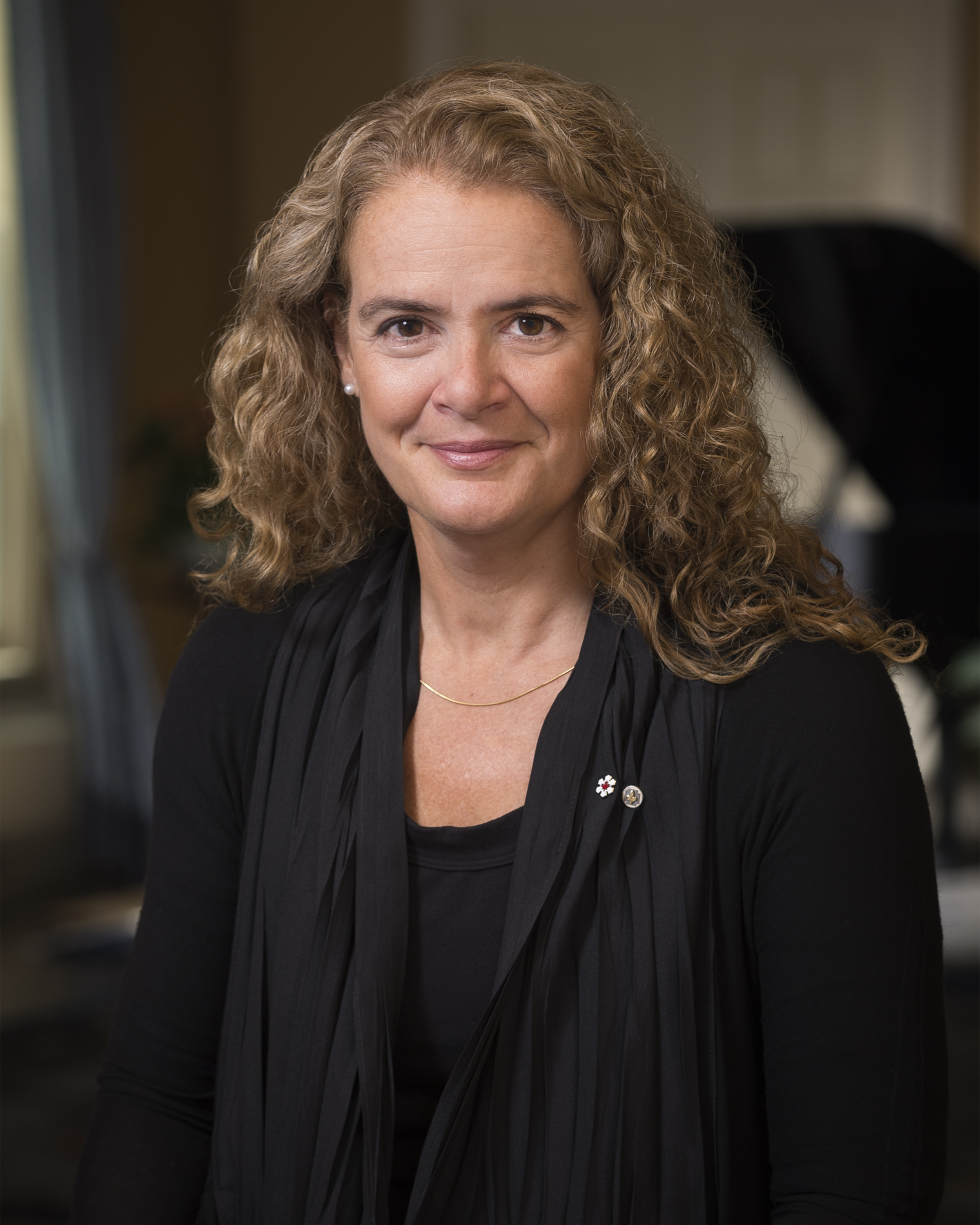